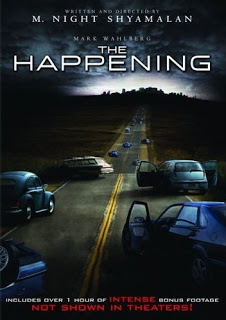 It’s been over 6 months since I wrote a DVD review (partially due to the lack of new release DVDs I bought this year). I hope to remedy that starting with the DVD for The Happening.

M. Night Shyamalan has always put out good DVDs for his films and this one was no different.

I should probably start by talking about the “1 hour of intense bonus footage” addressed on the box. I would have to say that this statement is most likely a ploy by Fox’s marketing department to sell DVDs, since the hour time frame is probably the length of all the special features combined and NOT the deleted scenes.

However, four of the five deleted scenes included on the DVD do include unrated footage that is more intense than what was shown in theatres, including a scene so graphic that, like Shyamalan says in his intro to the scene, the shock just takes you out of the film.

This brings me to my favourite of the five featurettes included on the disc, entitled The Hard Cut. This featurette has Shyamalan talking about moving from a PG-13 to an R rating and how the footage he shot ended up being too much. Another interesting thing he says was that he didn’t want to follow the route of so many DVDs and create an “unrated” version of the film, because he thought that the extra violence did not really add anything to the story (even though he did put the scenes in the deleted scenes section).

In quick summary, the other featurettes on the DVD are:

Rounding out things is a gag reel, which are always fun to watch.