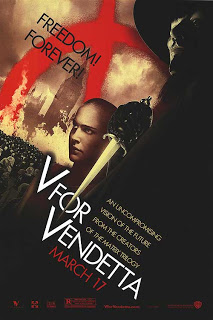 In the United Kingdom, November 5 is known as Guy Fawkes day, which “celebrates” Fawkes’ failed attempt to blow up Parliament over 400 years ago.

V for Vendetta, based on the graphic novel of the same name, takes the view that maybe Fawkes may have had a point, especially in the light of the United Kingdom going under totalitarian rule.

Hence this film tells the story of V, a vigilante wearing a Guy Fawkes mask, and his attempts to start a revolution.

The film was originally set to be released around the 400th anniversary of Guy Fawkes day, but the London bombings delayed the release until the following March.

The film is definitely entertaining with Hugo Weaving great as the charismatic V (even though he spends the majority of the film under the mask). It can also be noted that Natalie Portman was brave enough to shave her head for the role.

You can also sense the involvement of the Wachowski Brothers, who wrote and co-produced the film (the film’s directed by James McTeigue, who was assistant director on the Matrix films).

V for Vendetta is definitely a good film to spend the 5th of November watching.