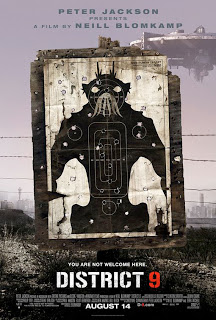 This film, which is a expansion of director Neill Blomkamp’s 2005 short film Alive in Joburg, was essentially consolation by producer Peter Jackson for the Halo film (which Blomkamp was supposed to direct) falling through.

I think a lot has been said about how this is supposed to reference apartheid in South Africa, so I will move more onto the format.

The film starts off in the form of a documentary (with some shaky hand-held camera work), before moving to a more classical narrative.

I found that the film was a quite good sci-fi/action film. However, was just the backdrop for the human rights message in the film, since you are supposed to sympathize with the aliens.

Overall, despite some motion sickness I got for the camerawork, this is definitely the sleeper film of the summer and it is well worth checking out.