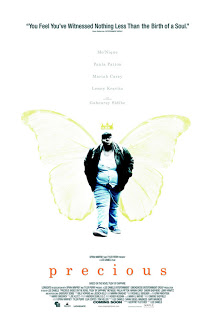 I will start by saying that the full title Precious: Based on the Novel Push by Sapphire is, in my opinion, way too long.

I have to say that I probably knew that this film was going to be nominated after it won the People’s Choice award at the Toronto Film Festival.  In fact there are some who are saying that it has a serious chance of winning Best Picture.

However, I have to say that even though the film is supported by Oprah, I have no real interest in seeing the film.  Urban dramas like this one has never really been my thing.

I sure that it’s a good film and Mo’Nique seems a shoe-in to win Best Supporting Actress, but I doubt I will be checking it out anytime soon.