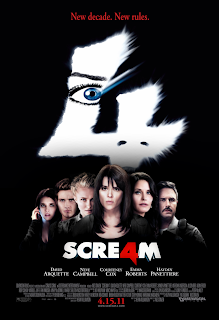 The original Scream came out in 1996 when I was 14 years old (though I was nearly 16 when I saw it for the first time), so the original trilogy had pretty much had the same relevance to my teenage years in the mid-1990s that the Nightmare on Elm Street and Friday the 13th series’ had for people growing up in the 1980s.

While Scream 3 was meant to be the series’ end, the series returns a decade later with both the original core and a whole new young cast of actors.

And I will stop there.  I will not say much more other than this was a very satisfying return for the series.  The film is still has the very self-referential tongue-in-cheek humour of the previous films and, after an admittedly tame third film, this is probably the most violent and gory of all the Scream films.

All and all, I consider the film a success and I would even rank it second (below the, still awesome, first film) when ranking my favourite films of the series.