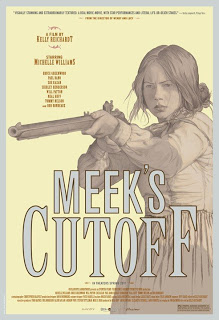 Meek’s Cutoff is the latest film by director Kelly Reichardt and it is currently playing at the TIFF Bell Lightbox as part of a retrospective on the director.

The film is somewhat slow-paced western about a caravan of people in the 1800s, who are travelling across Oregon looking for a place to settle (or at least a source of water).

The “Meek” of the title comes in the form of the grizzled frontiersman, played by an unrecognizable Bruce Greenwood, who acts as a guide for the caravan.

The search for water in the film is almost a MacGuffin and focus quickly changes to the tensions that arise when the group encounters a Native American man.  Meek would rather kill the “Indian” with extreme prejudice, however others in the group (especially Michelle Williams’ Emily Tetherow) are willing give him a chance to lead them to water.

The events within the film play out with little to no exposition.  The film features no real beginning and no real end and it’s almost like the film allowed us to observe this group of people during a short period of their lives. The film is also notable for its use of a 4:3 aspect ratio, which gives them film a “boxed in” look.

Overall, while the slow pace of the film may try some viewer’s patience, Meek’s Cutoff is definitely an interesting look at what life was like in the early days of the United States.