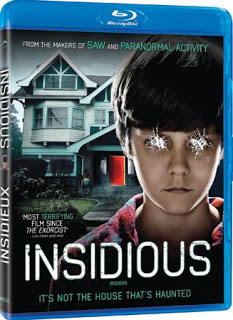 Today I picked up the haunted house film Insidious on Blu-Ray.  I originally saw the film at last year’s TIFF, where it showed as part of the Midnight Madness programme.

One thing that I would like to comment on is the somewhat misleading marketing surrounding the film, evidence of which is all over the packaging.  I like the film, however I think that quotes such as “Most Terrifying Film Since The Exorcist” and “The Scariest Movie In Decades” only serve to lift expectations to a unrealistic level.  The film has some good (jump) scares, but it definitely NOT the scariest film in decades.

As for the disc itself, it seems fairly bare-boned with only three special features listed: Horror 101: The Exclusive Seminar, On Set with Insidious, and Insidious Entities.

)
Film Thoughts: An enjoyable film that seemed to be a throwback to horror films from the 1950s.
Film Rating: 8/10