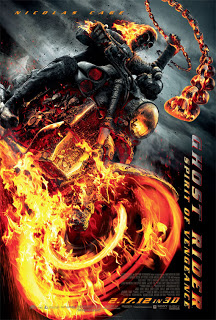 The directorial duo of Neveldine/Taylor had a somewhat entertaining start to their career with the original Crank.  However, in every film they made since (Crank 2, Gamer, and now Ghost Rider: Spirit of Vengeance), they have steadily become my least favourite filmmakers.

Through their direction, Neveldine/Taylor took the sequel to 2007’s Ghost Rider (a film that was campy, yet entertaining) and just turned it into a big fat joke.

For starters, there’s Neveldine/Taylor’s trademark of filming most scenes in low-angle close-ups, which I’m definitely not a fan of.  Then there’s these comic-booky narration scenes, which are just plain goofy (Jerry Springer as the devil anyone?).

Then there’s the acting.  Believe or not, but Nicolas Cage as Johnny Blaze is actually one of the least crazy characters of the film.  Ciarán Hinds plays the lead villain Roake like Robert DeNiro with Bell’s Palsy. His henceman Kurdish (Sorin Tofan) is probably one of the most irrating and laughable villains ever in a superhero film.  Christopher Lambert (Highlander) makes an extended cameo, which would have been cool if he wasn’t playing a bald monk covered in tattoos.  The only supporting character that is somewhat decent is Idris Elba as this motorcycle riding religious man named Moreau (though the fact that I just said “motorcycle riding relgious man” says a lot about the quality of the film).

It might be strange saying this in relation to film about a guy with a flaming skull, but I thought that the Ghost Rider CGI was more obvious in this film than in the first.  Also, I don’t know if the film was filmed in 3D or postconverted, but there wasn’t really any impressive 3D effect in the film (in fact, there was better 3D in the trailers for Wrath of the Titans, John Carter, and The Amazing Spider-Man, which preceded the film).

If there is one positive thing I will say about the film, apparently little kids will find the film “wicked” (at least according to comments I overheard on the way out of the theatre).

In conclusion Ghost Rider: Spirit of Vengeance is a very disapointing sequel to a film that probably shouldn’t have recieved a sequel in the first place.