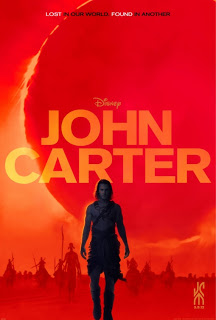 Apparently they have been trying to make a film adaptation of Edgar Rice Burroughs’ A Princess of Mars since at least 1931.  This was the first of a series of novels about “John Carter of Mars” written in the early twentieth century, which influenced much of the later science fiction works to come out in the twentieth century.

With that kind of lineage, I can say that the film adaptation is…OK.  There’s nothing too spectacular or flashy about John Carter.  It’s a very straight-forward Sci-Fi/Adventure story.  I think part of the irony of this story influencing so much is that I’ve pretty much seen everything in this film before…not that it’s an overall bad thing.

If there is one major criticism I have about the film, it is that it spends a little bit too much time with its Earth-bound prologue.  The film has a two hour and twelve minute running length and I’m sure some of that could have been trimmed down.  Also, it’s very much and origin story, which feature a bit more exposition than I would have liked.

Overall, it was an enjoyable film, if not a very memorable one.