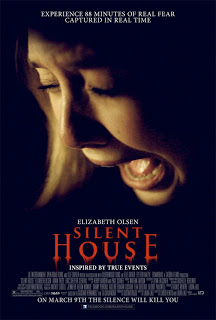 Silent House is a horror film that is presented as one continuous shot.  I’ll say now that this was probably one of the most effective elements of the film.  The film flows seamlessly and you almost forget at times that it’s a non-stop shot (though I managed to spot a couple of the invisible cuts).

This is a film that is more about building tension than having constant jump scares.  The film gets very suspenseful at times and, with the constant action, there is no quick release for the tension.

If there is one criticism that I have, it’s that by the time the third act comes around, I have pretty much figured out where the film is going.  However, in the end, it was only a small nitpick about what was otherwise a quite suspeseful horror film.