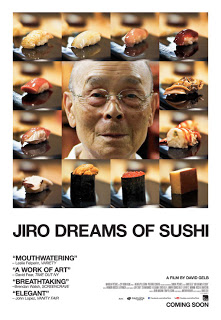 Jiro Dreams of Sushi tells the story of Jiro Ono, who is considered one of the top sushi chefs and a small basement restaurant in Tokyo.  The film also deals with the pressures faced by Jiro’s son Yoshikazu, who is expected to not only carry on, but exceed his father’s legacy.

The way this documentary is shot is definitely going to result in you craving sushi afterwards.  All the dishes are shown in a full-frame, larger than life, close-up and it’s just mouth-watering.

It’s also interesting on how it’s noted on how the growth of the sushi industry has caused some problems with supply.  Sushi used to cost too much to eat reguarlly (Jiro himself charges means starting at 30,000 yen – about $364).  However, now sushi is available everywhere and now there’s a shortage of fish due to over-fishing.

Overall, it was an interesting and enjoyable documentary that definitely made me hungry.