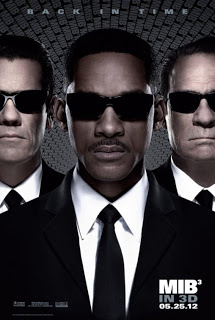 It would be understandable for someone to be apprehensive about a second sequel to the sci-fi/comedy Men in Black.  2002’s Men in Black II didn’t have the same charm as the 1997 original and the fact that it took a full decade for a third chapter to be made seemed to hint that people weren’t exactly clamoring for a third chapter.

However, when it is all said and done, I thought that Men in Black III was a pretty decent film and a huge improvement from the last one.  That said, it was still not on par with the first film.

The standout for the film was definitely Flight of the Conchord’s Jemaine Clement as the delightfully evil villain Boris the Animal.  He steals the show whenever he’s on screen, so it’s a shame that he only appears in the film sporadically.

The other standout in the film (who’s on-screen for longer) is Josh Brolin as the younger version of Tommy Lee Jones’ character Agent Kay.  Brolin does a spot-on impersonation of Jones (who is relegated to extended cameo status) and had great chemistry with Will Smith’s Agent Jay.

The actual plot of the film has Jay going back in time to 1969 to prevent Boris from killing Kay and altering the timeline.  It’s probably not the most original plot in the world, but I thought it worked.  However, there is an odd supporting character played by Michael Stuhlbarg, who I am sure would annoy some viewers (mostly because he is so odd and childlike).  They also decided to tie together the film as the final chapter of a trilogy with a plot revelation that may seem shoehorned to some (though I didn’t mind it).

Overall, for a sequel that had low expectations all around, I would say that Men in Black III was worth my time.