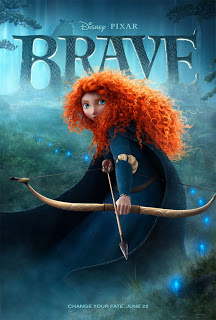 After seeing the latest Disney/Pixar collaboration Brave, I realized how difficult a film it is to market without giving away some major plot details.  Indeed, the film I saw today was quite different than the film that was advertised in the trailers.  That said, I still enjoyed the film that I saw.

Without giving away too much plot details, I would say that Brave can be described as a mix between the types of films released by Studio Ghibli in Japan and Scottish folklore.  I can’t really say much more than that without giving away too much about the film (though there’s a who’s who of Scottish actors in the voice cast including Kelly MacDonald, Billy Connolly, Robbie Coltrane and Craig Ferguson).

Overall, I found that I quite enjoyed Brave.  A lot of people have been nitpicking about how different this film is from Pixar’s other films and I respond by saying that I applaud them for that.