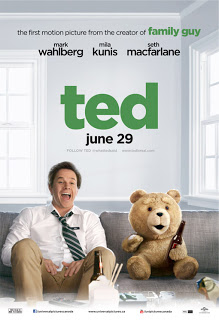 Ted is a movie based on a gimmick, though it’s a quite funny gimmick.  Most of the comedy in the film is dependent upon the fact that a bunch of lewd and adult acts are being perpetrated by a talking teddy bear.

If it wasn’t for this gimmick, the film would end up just being your average “best friend endangers relationship” romantic comedy.  The fact that the best friend is a foul-mouthed talking teddy bear is what makes this film stand out.

There’s also the fact that writer/director/co-star Seth MacFarlane like to fill his material with countless pop culture reference, which come at random times.  In fact, a surprising large chunk of the plot involves a certain 1980s science fiction film.

Overall, I had plenty of laughs watching Ted and I thought that it was a fun movie.