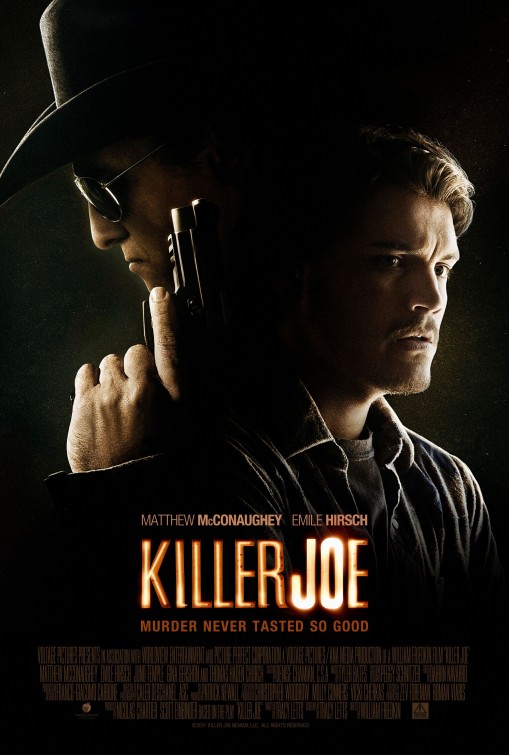 After the whole projector breakdown fiasco on Tuesday, I returned today to see Killer Joe in its entirety and I am glad that I did.  I was correct in my estimation that there was only half an hour left to the film when the incident occurred. However, I have to say that I am glad that I got a chance to see that final half hour, because it totally made the film for me.

Well, lets backtrack a bit shall we, Killer Joe is about a man named Chris (Emile Hirsch), who is in desperate need for money.  He decides to hire Killer Joe Cooper (Matthew McConaughey), a detective that moonlights as a contract killer, to kill Chris’ hateful mother so he (and his father, sister, and stepmother) could collect the insurance money.

The catch is that Killer Joe does not work for free.  In order to guarantee that Chris will pay Joe’s fee after the insurance money is collected, Joe demands Chris’ somewhat mentally slow sister Dottie (Juno Temple) as a retainer.

The film is based on the play by Tracy Letts (who also wrote the screenplay) and only really focuses on the five major characters – Chris, Joe, Dottie, Chris’ father Ansel (Thomas Haden Church), and stepmother Sharla (Gina Gershon).  Of the five, I would have to say that Matthew McConaughey and Juno Temple stick out the most and I wouldn’t be surprised if either of these performances received awards attention.  This is probably the darkest role of McConaughey’s career and he absolutely knocks it out of the park.  Juno Temple on the other hand is playing someone who seems to have not really matured past childhood, even though she is more smart and self-aware than everyone thinks.

Like I said, the film was made for me throughout the final half our of the film, which is essentially a single extended scene.  I am not going to spoil what happens during this sequence, but it includes the most violent and disturbing elements of the film, which actually resulted in the film getting an NC-17 in the United States (here in Ontario, the rating is, the somewhat more lenient, 18A).

Overall, I would have to say that Killer Joe is an excellent film and I am happy that I managed to see the whole film after that fiasco earlier this week.