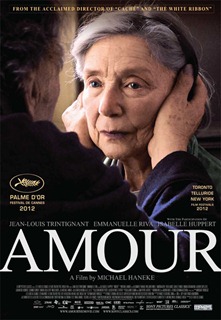 If you aren’t feeling completely depressed after seeing Michael Haneke’s new film Amour, you are one emotionless person.  The film is about a hard truth everyone has to experience, but don’t often think about; the slow deterioration of someone that you love.  Almost the entire plot of the film is solely made up of the old married couple of Georges (Jean-Louis Trintignant) and Anne (Emmanuelle Riva) over the course of a few months, with the odd supporting character showing up from time to time.  Anne suffers from a stroke early on in the film and Georges is left to take care of her in her slowly deteriorating state.  Georges still loves his wife very much and want Anne to live her final days the best way possible, refusing to admit her into a hospital or nursing home.  However, as Anne’s condition progressively worsens, Georges has to end up making some very tough decisions. This is not an easy film to watch, especially if you have first hand experience with this type of situation.  The film features very little music (all done diegetically) and the film uses natural lighting and very little camera movement.  As such, it increases the realism of the film somewhat, since you are just watching Georges and Anne lives play out.  There are also moments within the film when time would jump forward a few weeks without notice, which I admit was a bit jarring, since Anne would be coherent in one shot and bed ridden in the next. While Amour is not really a film I would rush out to see again, I thought that it was an excellent character study about a man trying to cope with the slow death of the woman he loves.10 | LOVED IT