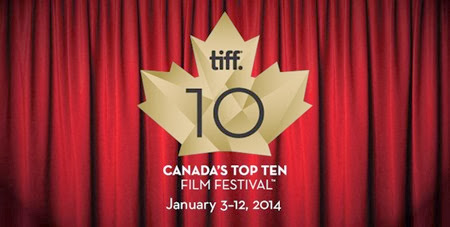 Earlier this week TIFF, announced the line-up for their annual celebration of the best of Canadian cinema, which will be screened at the TIFF Bell Lightbox from January 3-12, 2014.  While there are the inevitable high-profile headliners, this year’s Canada’s Top Ten features quite an eclectic selection of films.  I shall now rundown this year’s line-up of film, giving my thoughts on each.

Asphalt Watches – Shayne  Ehman, Seth Scriver
Screens: January 10, 9:00pm and January 11, 3:00pm Having played as part of the Vanguard programming at this year’s Toronto International Film Festival, this animated film is probably the most crazy selection in the Canada’s Top Ten line-up.  That means that I am most definitely going to try and see this. Enemy – Denis Villeneuve
Screens: January 4, 9:00pm and January 5, 5:30pm Denis Villeneuve (Incendies) has definitely been a busy man.  Not only did he direct the Hollywood thriller Prisoners, but he also made this locally produced doppelgänger thriller.  The common thread between both of those films is the inclusion of Jake Gyllenhaal in the cast.  Villeneuve and Gyllenhaal will also be on stage for an In Conversation with… discussion, prior to the January 5 screening of the film. The F Word – Michael Dowse
Screens: January 3, 8:00pm and January 4, 3:30pm From the director of Goon comes this Toronto-set romantic comedy starring Daniel Radcliffe and Zoe Kazan.  I heard great things about this film when it premiered at the film festival and I look forward to watching it when it plays at Canada’s Top Ten. Gabrielle – Louise Archambault
Screens: January 8, 6:30pm and January 11, 6:30pm Admittedly, this film would be off my radar, if it wasn’t for the fact that it’s Canada’s submission for “Best Foreign Language Film” at next year’s Oscars.  As such, I somewhat feel obliged to check it out. Rhymes for Young Ghouls – Jeff Barnaby
Screens: January 11, 9:00pm and January 12, 12:00pm This interesting-looking First Nation’s film was actually one of the films I was considering checking out at this year’s film festival.  I never got around to seeing it, but now I have another chance. Sarah Prefers to Run – Chloé Robichaud
Screens: January 6, 9:00pm and January 7, 3:30pm This is the only film in the Canada’s Top Ten selection I haven’t heard of previously.  However, inclusion on this list is more than enough to get Sarah Prefers to Run noticed. Tom at the Farm – Xavier Dolan
Screens: January 5, 9:00pm and January 8, 3:30pm Xavier Dolan had huge success last year with Laurence Anyways and he returns this year with this psychological thriller.  Even if I don’t get around to see it as part of Canada’s Top Ten, I still want to see Tom at the Farm at some point.  Hopefully, it will get a regular release. Vic + Flo Saw a Bear – Denis Côté
Screens: January 9, 9:00pm and January 10, 3:30pm Other than being somewhat familiar with director Denis Côté, there is not really much I have to say about this film.  It does have an interesting title, which I don’t think really has anything to do with the actual plot of the film. Watermark – Jennifer Baichwal, Edward Burtynsky
Screens: January 10, 6:30pm and January 11, 12:00pm I’ve been meaning to see this documentary for a while, so hopefully the Canada’s Top Ten screening will finally be my chance. When Jews Were Funny – Alan Zweig
Screens: January 4, 6:30pm and January 9, 6:30pm I actually saw this film a few weeks ago when it had its regular release at the Bloor Cinema (sadly I had internet troubles at the time and was unable to review it).  I can say that I enjoyed this film, which starts off as a talking heads documentary, involving many Jewish comedians, and it turns into a self-reflexive film about Alan Zweig contemplating his Jewish identity.  The film won Best Canadian Film at this year’s film festival and is definitely worth checking out.
In addition to the features, here is the line-up of the Canada’s Top Ten Shorts Programme (screening January 7, 6:30pm):

Of these shorts, I believe I’ve only seen the excellent social media cautionary tale Noah. One more event happening as part of the festival will be In Conversation with…John Greyson, which will undoubtedly include some talk of the director’s recent imprisonment in Egypt. Well, that wraps up the Canada’s Top Ten line-up.  Tickets are on sale now for TIFF members and will be available to the general public on December 11.