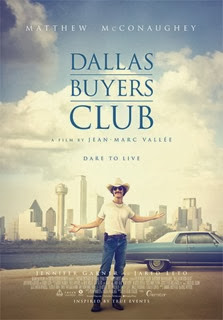 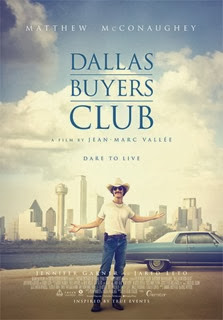 My pre-Oscar catch-up begins with this biographical drama starring Matthew McConaughey and directed by Quebecois filmmaker Jean-Marc Vallée (Café de Flore). The film, which takes place in the mid-1980s, tells the story of Ron Woodroof (McConaughey), an electrician and rodeo cowboy, who finds out that that he is HIV positive.  While at first Woodroof is appalled at the thought that he has a decease thought to be only contracted by homosexuals, he eventually tries to to locate a treatment, seeking the help of Dr. Eve Saks (Jennifer Garner).  When Woodroof finds out that AZT, the experimental drug being used to treat HIV patients, can be toxic, he illegally smuggles in safer, yet non-approved, drugs from outside the country and partners up with a transsexual woman named Rayon (Jared Leto) to form the “Dallas Buyers Club,” which charges AIDS patients for a membership, which allows them access to all the drugs they need.  As the FDA attempt to stop his operation in its tracks, Woodroof fights for the right of people with AIDS to receive proper and safe treatment. Part of me wishes that I saw Dallas Buyers Club before it received all the awards praise it is currently getting, which includes six Oscar nominations.  At this point, it is a bit difficult for me to judge the film on its own merit, without my opinions being clouded by the fact that the film has a Best Picture nomination, as well as acting nominations for Matthew McConaughey and Jared Leto.  For what it’s worth, I thought that Dallas Buyers Club was an okay enough film.  I admit that it took a little while for me to get into the film, since Ron Woodroof is a bit of a unlikeable homophobic sleezeball at the start of the film.  In fact, there are quite a few homophobic characters in the film, which was likely a sign of the time period, when it was thought that only gay men got AIDS.  I would say that I started to get into the film more once Ron Woodroof got the idea to take the safe drugs, which helped him survive longer than the 30 days he was given to live, and find a way to provide them to other folks with HIV. Probably the most notable element of Matthew McConaughey’s performance is the fact that his character is sickly thin for most of the film, which actually gets somewhat worse as time goes on.  While I am sure this transformation is going to factor greatly in McConaughey’s Oscar chances, I’m not quite sure that the performance as a whole is awards worthy.  For the most part, McConaughey is just playing his usual self, except he is looking very thin while doing so.  Then there’s Jared Leto, who returns for his first film role since Mr. Nobody way back in 2009.  While I have nothing bad to say about Leto’s performance, it is blatantly obvious that all the awards praise he is getting is coming from the fact that he is playing a transsexual (and, like McConaughey, lost a lot of weight).  Admittedly, he is pretty good in the role, but once again this is a case of Oscar praise being given solely for an on-screen transformation.  That said, I also have no intention of joining the growing backlash against the performance, which seems to be growing following Leto’s Golden Globe win. Overall, while the film is far from my favourite film of the Best Picture nominees, I still thought that Dallas Buyers Club was a decent enough film.  Also, the success of this film will probably lead to great things for director Jean-Marc Vallée, who I hope still keeps making films in Canada.8 | LIKED IT