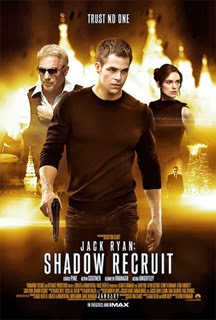 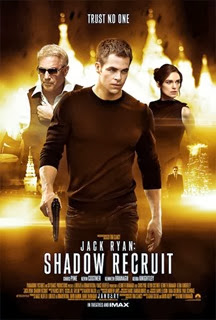 Based on the characters created by Tom Clancy, Jack Ryan: Shadow Recruit goes back to the start of the career of the CIA analyst.  After being injured during the war in Afghanistan in 2003, Jack Ryan (Chris Pine) is recruited into the CIA by Thomas Harper (Kevin Costner).  A decade later, Ryan is working a cover as a Wall Street broker, keeping his status as a CIA agent secret from everyone, including his fiancé Cathy Muller (Keira Knightley).  When the Russian Federation loses a key vote in the United Nations, Ryan notices that billions of Russian assets are locked away in accounts controlled by Viktor Cheverin (Kenneth Branagh).  This leads Ryan on his first field assignment to Russia, where he hopes to put a stop to Cheverin’s plans to use his assets, and a planned terrorist attack, to send America into an unrecoverable depression. It has been 30 years since Tom Clancy, who passed away this past October, published the novel The Hunt for Red October, which introduced the world to CIA analyst Jack Ryan.  The character would first be played on screen by Alec Baldwin in the 1990 adaptation of the novel and would subsequently played by Harrison Ford, in 1992’s Patriot Games and 1994’s Clear and Present Danger, and Ben Affleck, in 2002’s The Sum of All Fears.  Jack Ryan: Shadow Recruit is the first film in the series not adapted from one of Tom Clancy’s novels and it is obviously an effort to reboot the character for the modern age. While I thought that Jack Ryan: Shadow Recruit turned to be a fine enough film, its somewhat generic action/thriller story turned out to be the film’s weakest element.  The film is obviously taking its cues from the action/thrillers from the last decade, particularly the Bourne series and, while the film still ends up being an entertaining way to spend a Saturday afternoon, there isn’t all that much substance to the film. Chris Pine is OK enough in the lead role, even though I would argue that he is the weakest of the lead cast members.  Kevin Costner comfortably continues the “grizzled mentor” portion of his career and I have to admit that I was probably most impressed by Keira Knightley’s role in the film.  Perhaps it’s just her excellent use of an American accent, which is undoubtedly better than the Russian accent Kenneth Branagh  puts on for his moustache-twirling performance as the film’s villain.  I should also note that this film seems to be continuing a trend, beginning with last year’s A Good Day to Die Hard, which seem to be trying to reintroduce Russians as film villains, more than two decades after the end of the Cold War. Speaking of whom, Kenneth Branagh also directs the film, which is definitely an interesting choice for him to go.  Branagh spent much of his career directing Shakespeare adaptations and hasn’t really done much mainstream genre fare prior to directing Thor in 2011, unless you count his adaptation of Frankenstein in 1994.  Of course, since his next film looks to be a new film version of Cinderella, it doesn’t look like Branagh is going to permanently move to being an action director. I’ll conclude by saying that it is probably unfair to compare Jack Ryan: Shadow Recruit to the previous films that the character appeared in.  It is quite obvious that this film was trying to reboot the character and go in its own direction.  While the results were somewhat generic, I will still say that I thought that it was a fine enough film and an entertaining way to spend the afternoon.8 | LIKED IT