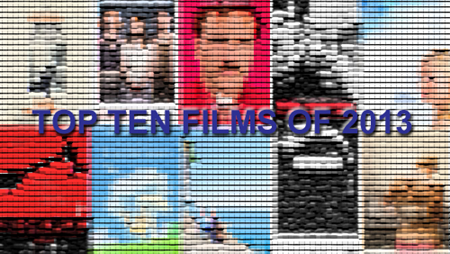 Happy New Year!  Now is the time that I rundown my top ten favourite films of the year.  This is a task that gets more difficult each year, since I saw over 50 films that I can consider among my favourites of the year, of which you can see the full list over at Letterboxd.  After much brainstorming, I have come up with a fairly satisfying ranking of my top films of the year.  My list doesn’t feature as many head-scratchers as in previous years, but there are still a few interesting selections on this list. Without further ado, here are my top ten favourite films of 2013!

10. Blue Jasmine The film is modern day classic from Woody Allen, with an exceptional performance by Cate Blanchett.  I’d be surprised if she isn’t mentioned when the Oscar nominations are announced.

9. Big Bad Wolves With equal messures disturbing violence and dark comedy, this was a very compelling film to watch.  The film may not be everyone’s cup of tea, but I still enjoyed the film immensely.

8. The Dirties An immensely well done social commentary that blurs the line between fiction and reality.  It’s quite disturbing how the events of the film escalate and the final moments of the film will just leave you stunned.

7. Before Midnight Who would have thought that a simple one-night romance 19 years ago would turn into one of the most realistic depictions of a relationship seen on screen? While it’s almost heartbreaking seeing star-crossed lovers, turned into a bickering couple, there is a certain charm about seeing Jesse and Celine grown and mature on screen.

6. Nebraska The best role in years for Bruce Dern and Alexander Payne at his peak.  The film’s simple plot allows the many great performances to shine.

5. Stoker Not only does this have a very dark and enjoyable story, but the way the film is shot and edited is just wonderful.  The film was breakthrough of sorts for Mia Wasikowska and I look forward to seeing more from her in the years to come.

4. Inside Llewyn Davis An absolutely heartbreaking tale from the Coen Brothers, with a great folk music soundtrack. The film is definitely one of the Coen’s most sombre and mature films, even though there are enough familiar elements to keep fans of the directors happy.

3. The Wind Rises Hayao Miyazaki concludes his career with a very emotional and mature swan song.  While the film is practically devoid of the fantastical elements Miyazaki is known for, it doesn’t make The Wind Rises any less of a joy to watch.

2. The Broken Circle Breakdown Features a great balance of happy and tragic moments, with great musical performances to tie the story together.  It gets a little heavy towards the end, but it just makes for a more multi-layered film.

1. Her The premise of this Spike Jonze love story might seem ridiculous on the surface, but it ended up being one of the most wonderful and touching love stories that I have ever seen.  I had a big smile on my face at many occasions during the watching of this film and, when it was all said and done, there was no film that deserved to be at the top of the list more than this one.