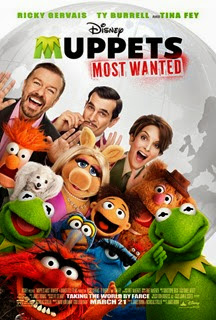 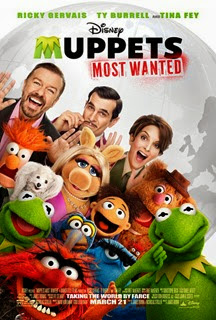 Following their 2011 comeback, the Muppets return for a world tour and heist hijinks.  Not knowing how to proceed after their reunion, the Muppets are approached by Dominic Badguy (Ricky Gervais), who offers to be their manager for a new world tour.  However, in reality Dominic is in league with the criminal mastermind Constantine, who is a dead ringer for Kermit (minus a mole on his face).  Kermit finds himself swapped with Constantine and thrown into a Siberian Gulag, under the watch of Nadya (Tina Fey).  In the meantime, Dominic and Constantine book the Muppets at venues close to the museums and banks that the duo rob.  With INTERPOL agent Jean Pierre Napoleon (Ty Burrell) and CIA agent Sam Eagle on their tail, the Muppets come in danger of taking of the fall for Constantine’s crimes. The Muppets back in 2011 helped to bring Jim Henson’s signature characters back into the spotlight, after more than a decade of relative obscurity.  After going in a very nostalgic direction for the previous film, Muppets Most Wanted comes off as a much more typical Muppet adventure.  Fans of the previous film might get upset at some retconning that happens in the early moments of the film, which essentially returns the Muppets to obscure status.  Of course, the fourth-wall breaking opening music number, once again written by Flight of the Conchords’ Bret McKenzie, concedes that this sequel will not be as good as the previous film. I have been a lifelong Muppet fan and have seen practically every theatrical film they starred in, with the exception of 1981’s The Great Muppet Caper, which is the film that is the most closely compared to this film.  While not sinking as low as 1999’s Muppets from Space, which arguably marked the period when the Muppets started losing popularity, Muppets Most Wanted is undoubtedly a lesser film than The Muppets.  The film is probably most missing the presence of Jason Segal, who co-wrote and starred in the previous film as a passion project.  While the film brings back director James Bobin (Flight of the Conchords) and co-writer Nicholas Stoller, it was Segal that gave the previous film most of its heart. That said, I still thought that Muppets Most Wanted was a fairly entertaining film.  While it’s a much more generic Muppet adventure this time around, it was still fun to watch the action.  The Muppets are more front-and-centre this time around, with the human characters relegated to more supporting roles.  The closest thing the film has to a human lead is Ricky Gervais as Dominic Badguy, even though he is much more of a comedic antagonist.  The film also features Ty Burrell (Modern Family) as the Inspector Clouseau-like Jean Pierre Napoleon and Tina Fey putting on a Russian accent as Nadya.  Then of course there are many cameos throughout the film, which include Christoph Waltz, Salma Hayek, Ray Liotta, and Danny Trejo.  Even, the second half of Flight of the Conchords, Jemaine Clement appears in a supporting role in the film. Then there are the songs in the film, written by Bret McKenzie.  While there are no possible Oscar-winners this time around, many of the songs were still quite fun.  Probably the song that stands out the most is the soulful parody “I’ll Get You Want You Want,” which is probably the most Flight of the Conchords-like song in the film (in fact, a version sung by McKenzie is the single from the soundtrack). Overall, while Muppets Most Wanted does not reach the same nostalgic high as the previous film, I still enjoyed it.8 | LIKED IT