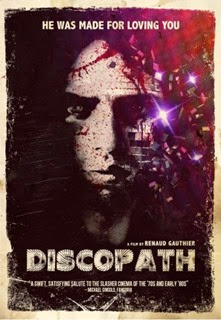 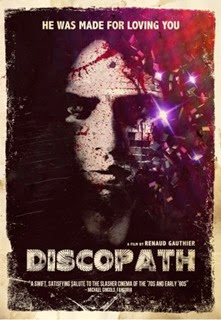 Out today on DVD is Discopath, the debut feature from Montreal-based filmmaker Renaud Gauthier.  Taking place during the disco era of the 1970s, Discopath is a horror film about a man named Duane Lewis (Jérémie Earp-Lavergne), who turns into a psychotic maniac whenever he hears disco music. After the body of one of Duane’s victims is discovered in a nightclub, Duane makes a run for Montreal, in the hopes of escaping this affliction.  However, soon enough, the disco music starts playing and the killing starts all over again.  When New York police detective Paul Stephens (Ivan Freud), who has been tracking Duane for years, hears of the new killings in Montreal, he heads on over to the city, in the hopes of putting an end to this discopath once and for all. I first saw Discopath as part of my coverage for the Blood in the Snow Film Festival back in December.  I thought that Discopath was pretty much what you would expect from a film about a man compelled to kill by disco music. The film is very much in the style of 1970s exploitation films and featured a pretty impressive disco soundtrack.  On a dime, Discopath is able to move between being a campy period piece and a violent and disturbing thriller.  The only real criticism I have about the film is that there’s no real female protagonist, even though many characters are set up to possibly be one.  However, overall Discopath is still a film worth checking out. The primary special feature on the Discopath DVD is a 24 minute Behind the Scenes featurette. The featurette gives an observational look at select days of shooting, while featuring interviews with the cast and crew. While the featurette doesn’t go extremely in-depth into the making of the film, there is still a peak at the various prosthetics used for the film’s practical gore effects.  The interviews also revealed some interesting trivia, such as how Renaud Gauthier first got the idea for Disopath a decade ago and how much of the film was self-financed. The featurette also featured bloopers, which were more like a few shots of behind-the-scenes gags, as well as various production photos, which are shown during the credits. Also on the DVD is an audio commentary, with director Renaud Gauthier, actor Ivan Freud, and composer Bruce Cameron, as well as the film’s trailer. Overall, Discopath is worth a watch for fans of campy 1970s exploitation films. Film Rating: 8 | LIKED IT
DVD Rating: 8 | LIKED IT Purchase Discopath on DVD from Black Fawn Distribution
Also available on iTunes (through Juice Distribution)