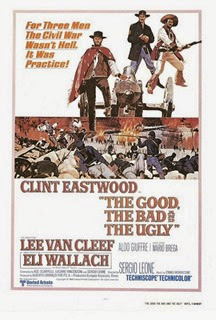 This month I head to the old west for, Sergio Leone’s classic 1966 Spaghetti Western, The Good, The Bad, and The Ugly.  The third film in Leone’s Dollars Trilogy, the film is set during the American Civil War and focuses on “Blondie,” aka the Man with No Name (Clint Eastwood), who has an uneasy partnership with the Mexican bandit Tuco Ramirez (Eli Wallach).  Both know half of the location of a cache of Confederate gold and they are both forced to accompany each other to the cemetery it is buried in.  However, the gold is also being searched for by the ruthless mercenary Angel Eyes (Lee Van Cleef), who will do anything to get it.  In this race between the Good (Blondie), the Bad (Angel Eyes), and the Ugly (Tuco), only one is destined to come out on top. I have to admit that The Good, The Bad, and the Ugly isn’t a pure blindspot entry for me, since I had already seen the ending for the film after coming across it on TV.  However, since the scene was without any context, this might have well been my first time seeing anything to do with this film.  I decided that I would jump straight to The Good, The Bad, and the Guy, without first seeing either A Fistful of Dollars or For a Few Dollars More.  However, I don’t really believe the three films have much of a connection, other than Clint Eastwood’s Man with No Name character.  Plus, I believe The Good, The Bad, and the Ugly is probably the most well-known of the three. While originally released in North America with a running time of 161 min, the version that I saw was the extended cut that was just under 3 hours long.  As such, I didn’t know what scenes were part of the original release and what was added back to the film.  That said, I did think that The Good, The Bad, and The Ugly was an enjoyable film, even though it was a bit different than I expected it to be.  Since I barely knew what the specific plot details were, I was a bit surprised that there was such a heavy Civil War presence in the film.  Historically, I didn’t even know that the Civil War happened at the same time as the Old West.  It’s also interesting that the three leads are obviously the only ones in the film that are actually speaking English, since all the other characters were speaking Italian or Spanish and dubbed over.  It would be interesting to see the original Italian cut of the film and see how it differs. One of the most memorable aspects of The Good, The Bad, and The Ugly is undoubtedly the score by Ennio Morricone.  The theme for the film is now so iconic that it is very likely that some people would have have heard it without even knowing what film it was from.  If nothing else, the film was worth seeing just to hear that theme played in the proper context. I should probably spend some time talking about Eli Wallach, who passed away last month at the ripe old age of 98.  I mostly knew Wallach from his latter day roles, which included a cameo in the Clint Eastwood-directed Mystic River.  It was quite likely that Wallach got that cameo by having acted with Eastwood in The Good, The Bad, and The Ugly, which I believe is his most famous role.  In fact, the film is just as much about Tuco as it is about The Man with No Name, with the character being best described as an antagonistic comic sidekick.  While he is not as dastardly as Angel Eyes, Tuco is still not a character who can be completely trusted.  Speaking of which, Angel Eyes seemed to come in and out of the plot at various points and never really seemed to be a consistent part of the story. Overall, I can say that I liked The Good, The Bad, and the Ugly and I look forward to someday watching the other films of the Dollars Trilogy.8 | LIKED IT