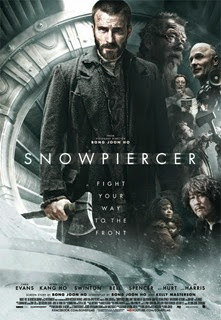 From South Korean director Bong Joon-ho (The Host) comes the post-apocalyptic action-thriller Snowpiercer. Following a failed experiment to cure global warming, the world is sent into a cataclysmic ice age, killing most of humanity.  For nearly 18 years, the surviving population has been on board the train Snowpiercer, which was designed by the reclusive Wilford (Ed Harris).  While the most elite occupy the front of the train, those in the the tail end live a heavily impoverished lifestyle and are kept in line by Minister Mason (Tilda Swinton).  With the help of Gilliam (John Hurt), the elder leader of the tail end,  Curtis Everett (Chris Evans) organizes an uprising, with the goal to storm the engine and confront Wilford.  To do this, Curtis needs the help of Namgoong Minsu (Song Kang-ho) and is joined in the uprising by Edgar (Jamie Bell), Tanya (Octavia Spencer), and Namgoong’s teenage daughter Yona (Go Ah-sung). Even though its release in North America was somewhat delayed, Snowpiercer follows Stoker and The Last Stand in the trio of English-language debuts by Korean directors.  Of course, even though the majority of the film features English-speaking characters, Bong Joon-ho retains his roots by casting, The Host co-stars, Song Kang-ho and Go Ah-sung in central roles in the film, which includes some of the dialogue being in Korean. Snowpiercer is probably a film that is best seen knowing little more than the basic premise.  There is point where the film shifts tone somewhat and emphasizes the science fiction aspects of the story, in addition to being a dark and violent thriller.  Snowpiercer also featured quite a bit of dark comedy, including a very standout scene in the middle of the film.  Tilda Swinton shines with her darkly humorous performance as the bespeckled and quirky villain Mason, who is probably the most memorable character in the entire film.  The film also features a very brooding and standout performance by Chris Evans.  As tortured and reluctant resistance leader Curtis, Evans really demonstrates his range as an actor.  This is quite evident in a scene late in the film, where Curtis is talking about how horrible life in the tail end truly was. While ultimately Snowpiercer is little more than an occasionally introspective action film, I can still say that I enjoyed myself watching the film.  In fact, the film is probably enough to make me want to go back and catch up with Bong Joon-ho’s Korean films, particularly The Host.  Even though a controversy with the Weinstein’s delayed the film’s North American release by about a year, I am quite happy that Snowpiercer finally surfaced and I recommend checking it out.8 | LIKED IT