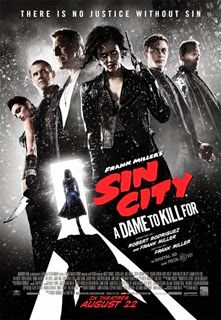 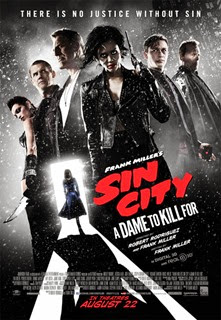 Nine years after the original, Robert Rodriguez and Frank Miller return for more tales from Sin City.  In the titular story A Dame to Kill For, photographer Dwight McCarthy (Josh Brolin) is approached for a favour by his highly seductive ex-lover Ava Lord (Eva Green).  However, Dwight soon gets more than he bargained for and must recruit the help of the hulking brute Marv (Mickey Rourke), as well as old town girls Gail (Rosario Dawson) and Miho (Jamie Chung).  The Long Bad Night focuses on Johnny (Joseph Gordon Levitt), a cocky young gambler, who gloats that he never loses.  However, he gets into trouble when he beats the wrong guy at poker.  In the final story Nancy’s Last Dance, Nancy Callahan (Jessica Alba) is struggling to cope with the suicide of John Hartigan (Bruce Willis), whose spirit watches over her as she falls deeper into alcoholism and depression.  Nancy eventually decides to take matters into her own hands and teams up with Marv to take her revenge out on Sin City’s corrupt politician Senator Roark (Powers Boothe). When it was released back in 2005, Sin City was a type of film that hadn’t really been seen before.  As one of the first films shot entirely in front of a green screen, the film captured the essence of Frank Miller’s neo-noir graphic novels.  In fact, the original film didn’t even have a proper screenwriting credit, since the stories were adapted directly from the source material.  Production on a sequel began as far back as 2006, but various delays prevented this film was surfacing until nearly a decade after the original. Unlike the first film, in which all the stories were adapted from Frank Miller’s graphic novels, Sin City: A Dame to Kill For consists of an adaptation of the graphic novel of the same name, as well as original stories Frank Miller wrote exclusively for the film.  With there being multiple Sin City stories that have yet to be adapted, it is unknown why it was chosen to make two thirds of the film consist of original content, since they come off a little more than filler around the vastly superior central story.  Nancy’s Last Dance is probably the slightly better of the two originals, since it is a direct follow-up to the story That Yellow Bastard from the first film.  The Long Bad Night ultimately came off as a bit pointless, especially since it was also a story that featured Senator Roark as the main antagonist. Having source material to work off really helped the titular story, which is undoubtedly the high point of the film.  While it might seem odd to some that Josh Brolin has replaced Clive Owen in the role of Dwight McCarthy, I can say that there is a major story reason for the re-casting.  Eva Green really shines as the extremely seductive Ava Lord, who isn’t afraid to show quite a bit of skin.  Replacing the late Michael Clarke Duncan, 24’s Dennis Haysbert also does a pretty good job at playing the seemingly unstoppable henchman Manute.  Then there is Mickey Rourke as Marv.  The film really seems to be playing up to the fact that Marv is a fan-favourite character, since his role is heavily expanded from the first film.  Not only does Marv have a major role to play in the titular story, but he is also the focus of the pre-credit short story Just Another Saturday Night, as well as teaming up with Nancy Callahan for the climatic story.  I also have to make note of a pretty entertaining cameo by Christopher Lloyd as a back alley doctor. On the stylistic side of things, Sin City: A Dame to Kill For really seems to make style over substance an art form.  Digital effects have changed quite a bit in nine years and the film looks much more like a comic book than the first film, with the 3D adding an interesting layered effect.  Of course, having just read the original graphic novel for A Dame to Kill For, the visuals in the film can’t really compare to the stark black and white visuals of the source material.  Also, while it was an interesting flourish in the original film, I think Robert Rodriguez might have overdid it on adding splashes of colour to the story.  The original film might have also been heavily stylised, but it still maintained a dark neo-noir aesthetic.  This time around, the style kind of overshadows the plot a little bit. I can probably admit that Sin City: A Dame to Kill For arrived many years too late and I didn’t love it as much as the first film.  That said, I still enjoyed the film for what it was and I thought that the adaptation of the titular story was excellent.8 | LIKED IT