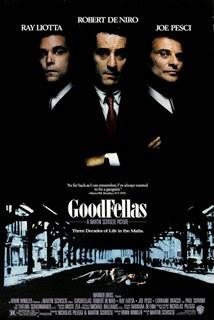 It is time for my second Martin Scorsese blindspot of the year, as I watch his 1990 mafia drama Goodfellas.  Based on true events, the film tells of the story of Henry Hill (Ray Liotta), who has always idolized the mafia and he begins working for a local crime family as a teenager, being taken under the wing by mob capo, Paul “Paulie” Cicero (Paul Sorvino) and his associates James “Jimmy the Gent” Conway (Robert DeNiro) and short tempered armed robber Tommy DeVito (Joe Pesci).  Over the years, the three rise up the ranks in the mafia, however they quickly find out that life as a wiseguy isn’t all that it’s cracked up to be. Goodfellas was one of those films that I technically hadn’t seen, but I already knew practically everything about it.  This is one of the films that Martin Scorsese has become most known for and it is hard not to notice references to it in pop culture.  In fact, when I was a kid, long before even hearing of the film, I remember watching the “Goodfeathers” sketches on the cartoon series Animaniacs, which recreated the characters of the film as pigeons.  Because I was already quite familiar with Goodfellas, actually watching the film seemed like more of a formality. I will admit that, even though I ended up liking Goodfellas, it also felt like the film was maybe a little too hyped up in my mind.  This was a film that was quite infamously shut-out at the Oscars by Dance with Wolves and I was really expecting to be blown away by the film.  While I will not argue that Goodfellas was not the more deserving film of that year’s Oscar nominees, it is also a film that I enjoyed and not much more.  In fact, there are probably films by Martin Scorsese that I like better than Goodfellas, such as Taxi Driver and even The Departed. I knew before watching the film, but the standout in Goodfellas is Joe Pesci’s Oscar winning performance as Tommy DeVito, with Pesci having essentially built his career on this short-tempered and violent character.  The film is also a career-making role of Ray Liotta, as the central character and narrator Henry Hill.  Speaking of the narration of the film, while I already knew that Liotta did narration, I was a little surprised that the narration is taken over on multiple occasions by Lorraine Bracco, who plays Hill’s wife Karen.  I do admit that this sudden change was a little distracting and seemed a bit inconsistent. I also have to say that it was very interesting watching Goodfellas after seeing last year’s The Wolf of Wall Street, since with the exception of the subject matter, both films are structurally very similar.  Both films are based on true events and follow the career of a criminal over the course of many years.  Also, both films are prone to misinterpretation, where viewers are attracted to the wrong aspects of the story.  In the case of Goodfellas, it can be very easy to read the film as being about how cool it is to be in the mafia.  From the image on the poster to the film’s narration, the film somewhat romanticizes the life of a wiseguy. However, on closer examination, Goodfellas is really about how unappealing this life really is.  No matter how much Henry Hill enjoys the life of a gangster, there is only a handful of ways that life in the mob is going to end up, and none of them really involve living happily ever after.  8 | LIKED IT