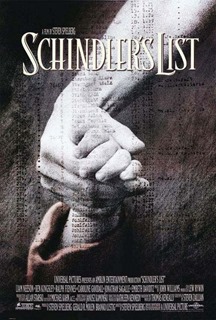 I’m ending my 2014 Blindspot line-up on a bit of a sombre note, as I finally check out Steven Spielberg’s Oscar winning Holocaust drama Schindler’s List.  Oskar Schindler (Liam Neeson) is a Nazi businessman in the Kraków Ghetto of Poland, who hires Jews, including his administrator Itzhak Stern (Ben Kingsley), to work in his factories.  While initially focused on making money, Schindler becomes increasingly concerned at how the Jews are treated, particularly by the very murderous SS officer Amon Goeth (Ralph Fiennes).  Schindler eventually concentrates his efforts on saving as many Jews as possible. The easiest way to describe Schindler’s List is that it is one long and bleak movie.  This is definitely not a movie meant for casual viewing and enjoyment of the film can really depend on your mood while watching it. The primary focus of the film is Liam Neeson as Oskar Schindler, whose opinion of Jews changes as the film progresses.  Initially he sees them as just cheap labour for his factories, but as he witnesses the horrors of the Holocaust firsthand, he sets out to free as many as possible.  His closest relationship in the film is with his Jewish administrator Itzhak Stern, which includes a very poignant moment when things are at their lowest and they decide to share a drink together, since they may not get another chance. Schindler’s List is at its bleakest during a 20 minute long sequence depicting the liquidation of the Kraków Ghetto. The sequence features very little (English) dialogue and brings the violence and horror of the Holocaust front and centre.  The sequence also breaks from the film’s start black and white visuals and features the image of a little girl in a red coat walking through the streets.  This image serves as the catalysis for Schindler’s change of heart about the Jews, especially when it comes to the fate of the girl. Schindler’s List is really a hard film to develop an opinion on.  The film is undoubtedly Steven Spielberg’s masterpiece and the film’s seven Oscars are very well deserved.  However, the film is not at all an enjoyable viewing experience.  Schindler’s List is a very dark and depressing 3 hour and 16 minute film and it is not something that I would casually rewatch.  However, I also can’t ignore how important of a film this is and I can say that I am happy that I finally was able to check it out.10 | LOVED IT