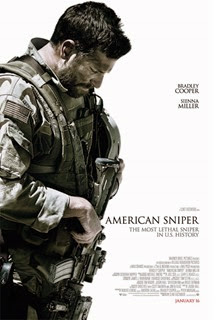 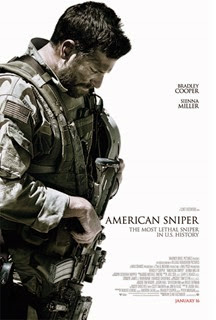 Clint Eastwood directs this film about the “most lethal sniper in U.S. history.”  Chris Kyle (Bradley Cooper) is a Texas man, whose father taught him to be a sheepdog, who “protects others from wolves”.  After a failed career as a cowboy, Chris enlists as Navy SEAL and trains to become a sniper.  Shortly after his marriage to Taya Renae (Sienna Miller), Chris ships off to fight in the war in Iraq and becomes legendary for his incredible accuracy on the battlefield.  Despite Taya wanting Chris to come back home with his family, he finds that the war and his desire to help his fellow soldiers is not something that he can easily escape. I am going to be completely honest and say that American Sniper wasn’t at the top of my list of films to see this month.  There are quite a lot of other films that I would like to catch up with and I haven’t really been keeping up with the films Clint Eastwood has directed, with me last having seen Hereafter back in 2010.  However, when American Sniper ended up receiving six Oscar nominations this past week, I thought that the completest in me should give the film a look. American Sniper is based on the memoir by the real Chris Kyle, who had 160 officially confirmed kills during his time as a Navy SEAL during the Iraq war.  The film moves back and forth between Kyle’s fighting on the battlefield, to his time back home, coping with the onset of post-traumatic stress disorder.  In fact, part of me wishes that American Sniper spent more time focusing on the latter than the former, since it would make for a much more interesting story.  Yes, Chris Kyle was considered a hero on the battlefield, but taking all of those lives comes at a great cost. As both a non-American and someone who is not exactly pro-war, it is hard not to be critical of the gung-ho Americanism present within American Sniper.  While there is criticism of the Iraq war peppered throughout the film, particularly an encounter Chris has with his brother, the film has absolutely no shades of grey when it comes to showing the enemy as the most evil of “savages,” which have to be taken out to save American lives back home.  There are definitely some horrific war images on display here, such as body parts in a kitchen or a madman with a power drill.  The film even has a full-on main antagonist in the form of the enemy sniper Mustafa (Sammy Sheik), who becomes Chris Kyle’s main adversary throughout the film. Clint Eastwood moulds Chris Kyle’s story in a full-on action film, which is full of American soldiers killing bad guys.  Kyle is portrayed as fully indoctrinated in his role as a hero soldier and the film waits until the final twenty minutes or so, before it decides to fully explore the effect the war had on Kyle mentally.  Then, there is the way Eastwood decides to end the film.  While American Sniper can be seen as a case of real life spoiling what becomes of the protagonist, it does not really matter in this case, since the film ends with a very tacked on conclusion, which comes off as very awkward and anticlimactic.  It is almost as if Eastwood felt obliged to portray these final events, but did not really know how to portray it on screen.  The way American Sniper ends definitely knocks a few points off it for me. It is probably not fair to judge American Sniper based on the number of Oscar nominations it received this past week.  However, I cannot say that I really agree with the film’s Best Picture nomination.  Despite its gung ho pro-war Americanism, the film is passable enough.  In fact, I would say that American Sniper is outright decent in parts.  However, by no means is it among the best films from 2014 and the very awkward and anticlimactic way the film ends left a bad taste in my mouth.6 | WATCHABLE