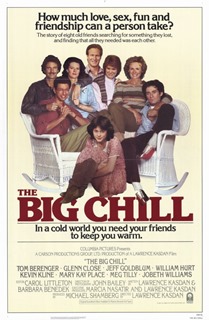 At the 1983 edition of the Toronto International Film Festival, writer/director Lawrence Kasdan’s sophomore film The Big Chill was chosen to open the festival.  The film went on to win that year’s People’s Choice Award and also received three Oscar nominations, including Best Picture.  The film now has the reputation of being one of the earliest true successes for the festival, to the point that the 30th anniversary of the film was celebrated at TIFF 2013, the Q&A for which is on the Criterion blu-ray. Following the suicide of a mutual friend, Sam Weber (Tom Berenger), Michael Gold (Jeff Goldblum), Nick Carlton (William Hurt), Meg Jones (Mary Kay Place), Karen Bowens (JoBeth Williams), and Chloe (Meg Tilly) gather together at the house of Harold and Sarah Cooper (Kevin Kline and Glenn Close) for the weekend. During this time, these friends contemplate how their lives have progressed in the years since they knew each other in college. The Big Chill is a comedy/drama featuring a now all-star cast, who at the time were still at the beginning of their careers.  One thing that occurred to me while watching this film is that The Big Chill likely had an influence on films such as The Breakfast Club or St. Elmo’s Fire, both of which would be released two years later.  Ultimately, The Big Chill is about the state of people’s lives after they reach their thirties.  As defined by Lawrence Kasdan, the title of the film refers to “a cooling process that takes place for every generation when they move from the outward-directed, more idealistic concerns of their youth to a kind of self-absorption, a self-interest which places their personal desires above those of the society or even an ideal." One of the most memorable aspects of The Big Chill is the film’s soundtrack, which consists of songs from the late 1960s to early 1970s.  Most of these songs are diegetically placed within the film, coming from the record collection of Kevin Kline’s character of Harold Cooper.  Presumably the songs from Harold’s youth, they are the only records that he is willing to play, as demonstrated during a scene when Jeff Goldblum’s character of Michael Gold asks Harold to “play something from this century.” As someone in his early thirties, I can probably consider myself part of the age group that The Big Chill is trying to relate to.  I can no longer consider myself to be young, but I have yet to fully settle into adulthood. For that reason, I can say that I liked the film. ★ ★ ★ ★ | LIKED IT