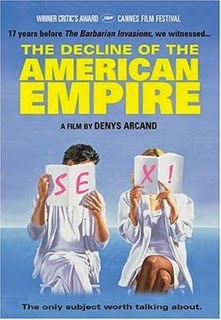 The opening film of the 1986 edition of the Toronto International Film Festival was Denys Arcand’s The Decline of the American Empire, which has the distinction of being the final film to screen at Toronto’s historical University Theatre in Yorkville.  The film went on to win that year’s People’s Choice award, as well as receiving an Oscar nomination for Best Foreign Language film and winning 9 awards, including Best Picture, at the 8th annual Genie Awards. The Decline of the American Empire focuses on eight intellectual friends, four men and four women, from the Department of History at the University of Montreal.  The women head for the gym, while the men begin preparing dinner.  The primary topic of conversation between both groups are their sexual exploits, particularly from Rémy (Rémy Girard), who boasts about finding a satisfying balance between his constant infidelity and his marriage with his wife Louise (Dorothée Berryman).  When the two groups reunite for dinner, conflicts begin to arise. The Decline of the American Empire is a comedy about sex, which has a lot more talk about it than actually showing it.  The film frequently contrasts the two conversations between the men and the women and shows how the opinion of sexual exploits differ between the genders.  Being an ensemble piece, there is no real central protagonist to the story, with each character getting their own individual moments.  However, that said, Rémy stands out the most from the group, particularly in how confidently he brags about cheating on his wife. The bulk of the film consists of these two conversations, though flashbacks are also used to illustrate the stories being told.  These flashbacks also make revelations about who’s sleeping with whom, which makes what is being said be seen in a slightly different light.  The film changes format during the final act when the two groups reunite with each other, which results in revelations and consequences for the parties involved. Director Denys Arcand would return to these characters seventeen years later in 2003’s The Barbarian Invasions, which ended up actually winning the Oscar for Best Foreign Language film.  After seeing The Decline of the American Empire, I would now be interested in seeing The Barbarian Invasions and seeing how it differs from this film. Altogether, I would have to say that The Decline of the American Empire is a quite interesting take on the battle of the sexes. ★ ★ ★ ★ | LIKED IT