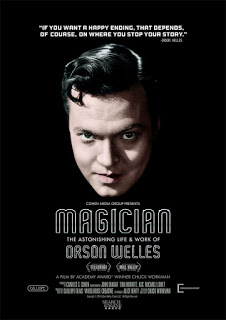 The life and career of Orson Welles is profiled in Magician: The Astonishing Life and Work of Orson Welles.  After an acclaimed early career in theatre and radio, including his infamous 1938 broadcast of War of the Worlds, Orson Welles hit the cinematic world by storm with his first feature Citizen Kane.  However, Welles would find his career slowed down by fights with studios, who would often re-edit Welles’ films after completion.  Despite a period of near obscurity, Welles would arise to become an inspiration to independent filmmaking.

It would be hard to be a cinephile and not at least be familiar with Orson Welles’ Citizen Kane, which I saw multiple times (and even wrote an essay on) while I was a film studies student.  A joke that Welles often made is that he started his career at the top and he has worked his way down ever since.  That is for the most part true, with much of his filmography being practically unknown to the average individual.  While most would probably know films such as Citizen Kane or Touch of Evil, not as many people would be familiar with his multiple Shakespeare adaptations, including his 1966 film Chimes at Midnight (aka Falstaff), which Welles himself considered to be his favourite film.

Magician: The Astonishing Life and Work of Orson Welles is really more a documentary for people that have little to no knowledge at all about the life and career of Orson Welles.  The film spends a fair amount of time on his early life and theatre and radio career, before it finally moves into his film career.  Orson Welles’ films were always praised for their technical prowess, even though he never personally saw the filmmaking techniques that he used to be a big deal.  However, he was a bit egotistical and a perfectionist, which would lead to him burning many bridges in Hollywood.

Magician is based mostly on archive footage and film clips, including many old interviews with Welles.  However, there are few talking head interviews with folks such as Peter Bogdanovich and Julie Taymor.  Ultimately, the main goal of Magician is to show Orson Welles as somebody who was misunderstood during his time, but is now widely regarded as a cinematic genius.  Since many cinephiles are probably already aware of this, whether or not they agree with that stance, this documentary is really only recommended for those who have little to no knowledge of the last 75 years or so of film history.