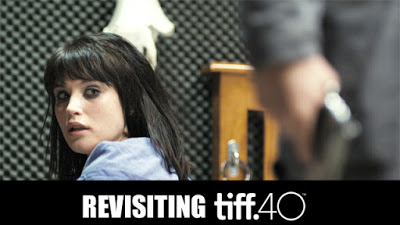 
Of the nine films that I saw at TIFF in 2009, a film that still stands out for me is J Blakeson’s crime thriller, The Disappearance of Alice Creed, which was the final film that I saw that year. In hindsight, I probably should have listed this film at the top of my favourite films at that year’s festival, instead of the Canadian vampire rock comedy Suck, even though I still really enjoy that film.

One of the most intriguing elements of The Disappearance of Alice Creed is that it only features three characters, with the vast majority of the action taking place in a single apartment. In some ways, this makes the film feel not too dissimilar from a play, even though the film features some very clever plotting. Particularly smart is the film’s opening ten minutes, which features practically no dialogue and just visually sets up the story of the film, in which the two thugs of Danny (Martin Compston) and Vic (Eddie Marsan) prepare to kidnap the titular Alice Creed (Gemma Arterton).

On the surface, The Disappearance of Alice Creed sounds like a relatively simple film. However, the film features a number of plot twists, which changes how the characters are viewed (beware some major SPOILERS up ahead). The first major revelation is that Danny is Alice’s boyfriend and that he arranged this supposedly random kidnapping with Vic, in order to extort money from Alice’s father. The second, and slightly more shocking twist, is that Danny and Vic are gay lovers, which really flips the plot on its head.

What follows as a result of all these revelations is a game of shifting allegiances. Alice pretends to go along with Danny’s plan, even though all she wants is to escape with her life. While Vic comes off as the alpha male of the duo, he is probably the most nervous of the two and just puts on the tough guy act, since it apparently turns Danny on. As for Danny, it turns out that all he cares about is taking the money all for himself and doesn’t really care about either of the other two.

In some ways, the very title of The Disappearance of Alice Creed is a spoiler. With both Vic and Danny being shot in the final standoff and succumbing to their wounds, Alice is left to escape and drive away with the bag of money. This ambiguous ending can be interpreted in many ways, though it is safe to assume that she follows the title of the film and just disappears.

The Disappearance of Alice Creed was made right as Gemma Arterton was on the verge of stardom, with her having a notable role in the Jame Bond film Quantum of Solace the year before. This was a very brave role for Arterton, since during the opening of the film she had to be stripped naked and placed in many compromising positions. The only of the other two cast members I was familiar with was Eddie Marsan, who is a quite prominent British character actor, who I had remembered from Mike Leigh’s Happy-Go-Lucky. As for Martin Compston, this is still pretty much the only film I know him from.

It is interesting to note that The Disappearance of Alice Creed was remade last year as a Dutch film entitled Reckless. As for director J Blakeson, it has taken him a while to direct a follow-up to this film, which was his debut feature, however is he marked down as the director of the sci-fi young adult adaptation The 5th Wave, which is scheduled to be released next year.

This was only about my fourth time seeing The Disappearance of Alice Creed, however I can say that I quite enjoyed it each time.