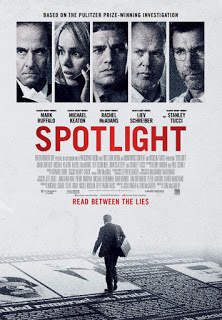 An investigative team at the Boston Globe uncovers a cover-up surrounding child molestation within the Catholic Church in Spotlight. Spotlight is an investigative section of the Boston Globe headed up by Walter ‘Robby’ Robinson (Michael Keaton) and his team of Mike Rezendes (Mark Ruffalo), Sacha Pfeiffer (Rachel McAdams), and Matt Carroll (Brian d’Arcy James). The Globe’s new editor-in-chief Marty Baron (Liev Schreiber) asks the Spotlight team to follow-up on a story about a Catholic priest charged with child molestation and the investigation reveals a cover-up that has been going back decades.

Spotlight is a film that goes back nearly fifteen years to the time when the Boston Globe uncovered the child molestation cover-up within the Catholic Church. This was an enormous scandal, which is still felt in some ways today. Even though I was raised Catholic and still make an effort to go to church, the revelations made in this scandal is enough to shake up my faith a bit. However, there is a character in the film, who mentions the difference between the Church as an institution and the Catholic faith as a whole, with the former being a very scary entity.

It can be argued that Spotlight is less about the Catholic Church scandal itself and more about the investigation that went into uncovering it.  This whole story started with one priest and it expanded to uncover a mass cover-up that went back at least 30 years.  The various players in this case include prosecutor Mitchell Garabedian (Stanley Tucci), who is greatly bothered by these cases, and smug defense attorney Eric Macleish (Billy Crudup), who is accused of “turning child abuse into a cottage industry.” One of the most important sources in the film comes in the form of merely a voice on the telephone (voiced by Richard Jenkins), who reveals exactly how far back this scandal goes.


Spotlight a film that makes you sad about how rough a time newspapers are having right now, with many traditional news sources being replaced by the internet. There is just something so enticing about seeing these reporters conduct countless interviews and spend hours in the library trying to put all the pieces together.  Even if you already know how all this investigation is going to turn out, it is still great to watch the film as various revelations are made about this story. Then the icing on the cake are the intertitles at the end up the film, which reveals exactly how deep this cover-up went.

When it all comes down to it, Spotlight is a film about good old fashioned journalism and how it can uncover one hell of story. Even if the sensitive subject matter bothers you, I would highly recommend checking out this film and seeing all the pieces of this scandal come into place.