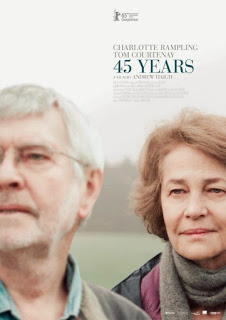 A woman rethinks her relationship with her husband in 45 Years. Kate and Geoff Mercer (Charlotte Rampling and  Tom Courtenay) are a couple a few days away from their 45th wedding anniversary. Geoff receives the news from that the body of his ex-girlfriend Katya has been found in the Swiss Alps, more than fifty years after her death. In the aftermath of the news, Kate begins to realize that Geoff has been holding a candle for Katya all these years, which causes Kate to rethink her marriage to Geoff.

45 Years is a relationship drama, which asks the question whether you truly know your significant other. While Kate was previously aware of Katya’s existence, she did not realize how much a part of Geoff’s life Katya was. Throughout the course of the film, which takes place over the course of the week, Kate discovers that her husband never stopped thinking about her ex-girlfriend, who has cast a shadow over their entire relationship. With their 45th anniversary right on the horizon, Kate begins to doubt that Geoff truly loves her.

45 Years is a film that is almost fully dependent on the performances by Charlotte Rampling and  Tom Courtenay. It is Rampling who has the more meatier role in the film, as Kate begins to realizes that she has always been the second choice when it comes to her relationship with her husband. Kate begins to look at the entire relationship with a new light and is unsure about whether she would be able to see her husband in the same light ever again. Indeed, the film’s final scene features a moment, which suggests that Kate’s discovery that Geoff has always maintained feeling for Katya might have caused some irreparable damage to their relationship. Charlotte Rampling’s performance in the film is more subtle than showy, with the performance relying a lot on Rampling’s facial expressions and body language.

Despite featuring some notable performances, 45 Years is a slow burn of a film that is in no rush to reach its final conclusions. It doesn’t take too long to realize where the plot of the film is going, however the story does seem to drag along a bit, showing how the relationship between Kate and Geoff slowly gets worse through each passing day. 45 Years is not particularly a very memorable film and if it doesn’t for the performances, the film would be completely forgettable.