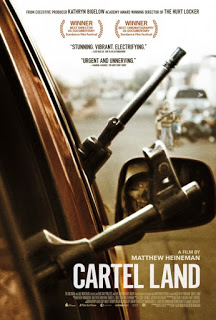 Vigilantes on both sides of the US/Mexico border fight back against cartel activity in Cartel Land. Activity and violence by Mexican drug cartels are at an all time high, with the cartels responsible for much of the drug smuggling and human trafficking into the United States. With the governments on both sides of the border supposedly unable or unwilling to do anything about the cartels, average citizens have taken the fight into their own hands. In the Mexican state of Michoacán, a local doctor named José Mireles becomes the leader of the Autodefensas, who are fighting back against the cartel activity in the region. Meanwhile, in Arizona’s Altar Valley, Tim “Nailer” Foley leads the Arizona Border Recon paramilitary group, who set out to try and prevent cartel activity from crossing the border.

From filmmaker Matthew Heineman and executive producer Kathryn Bigelow comes this fly-on-the-wall look at the efforts of ordinary citizens to fight back against cartel activity in Mexico, which has become a growing problem in recent years. The majority of screen time in Cartel Land is devoted to the story of Dr. José Mireles, aka “El Doctor,” who sees the government, police, and military in Mexico as corrupt, who do nothing to stop the drug cartels that are terrorizing the towns in the state of Michoacán. This results Mirelse and others from taking up arms and becoming the “Autodefensas.”

The story of the Autodefensas are contrasted north of the border with the Arizona Border Recon lead by Tim “Nailer” Foley. I am going to say right away that the inclusion of this American vigilante story is Cartel Land‘s biggest flaw. While Matthew Heineman’s goal was obviously to show the fight against cartels on both sides of the border, it is immediately obvious that Foley and his group are right-wing extremists, who are fueled by racism. Foley even says straight out in one of his interviews that he started the Arizona Border Recon as a response to “illegals” taking all the good jobs. Despite the very black and white viewpoint of Foley doing “good” fighting against the “evil” cartels, the Arizona Border Recon isn’t really seen doing much in the film, other than intercepting a group of illegal immigrants and turning them into the border control. This whole plot-line could have been removed entirely and made Cartel Land a much better film.

Cartel Land is not a film that shies away from showing how terrible cartel activity is in Mexico, which includes some incredibly graphic and violent imagery, which is sure to quite disturbing to viewers. Over the course of the film it becomes apparent that, even though José Mireles began with a noble cause, the Autodefensas in some ways ended up being just as bad or even worse than the cartels they were fighting against.

While Cartel Land in indeed a very intense and disturbing documentary, the message of the film is ultimately clouded by the decision to contrast “noble” vigilantism within Mexico to racist right wing hacks in America.