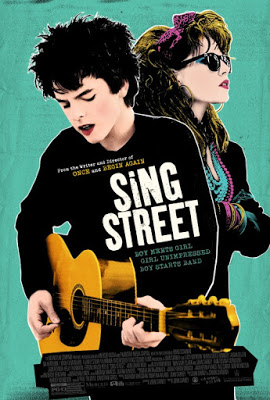 From writer/director John Carney (Once) comes this coming of age story set within the new wave/new romantic era of the mid-1980s. Conor (Ferdia Walsh-Peelo) is a 15-year old teenager living in 1985 Dublin. When his family sends him to the Synge Street Christian Brothers School, Conor immediately finds himself targeted by bullies and the strict headmaster. When Conor comes across the beautiful aspiring model Raphina (Lucy Boynton), he tries to impress her by saying he is in a band. Conor then rushes to form a band named “Sing Street” with other students at the school, with his older brother Brendan (Jack Reynor) providing advice and musical influences,

It can probably be safe to say at this point that, even though he has a bit more of a diverse filmography in Ireland, John Carney has carved a niche in North America with films focusing on aspiring musicians. His 2007 breakthrough film Once is still a wonderful and heartbreaking film and helped to introduce audiences to now-established musical artist Glen Hansard. 2014’s Begin Again tried to recreate the magic of Once in a North American setting, but it was not as successful. As such, it is a great thing that John Carney has returned to Dublin for his new 1980s-inspired coming-of-age story Sing Street, inspired by Carney’s own experiences as a teenager growing up in the 1980s.

Dublin was not the best place to be in the 1980s and everyone harbored dreams of emigrating to London for a better life. Conor’s parents Robert (Game of Thrones’ Aidan Gillen) and Penny (Maria Doyle Kennedy) are in poor financial standing, which necessitates the need to transfer Conor to the Synge Street school. On the first day of school, Conor is immediately targeted by local bully Barry (Ian Kenny) and reprimanded by the headmaster Brother Baxter (Don Wycherley) for wearing brown shoes, instead of the black ones required by the school’s dress code. However, Conor also befriends fellow school misfits, such as rabbit-fixated multi-instrumentalist Eamon (Mark McKenna) and band manager Darren (Ben Carolan), and forms the band Sing Street, all with the goal of impressing the mysterious and beautiful Raphina.

It is almost expected for a film set within the 1980s to feature a great new wave soundtrack and Song Street indeed features many songs from the likes of Duran Duran, The Cure, and Hall and Oates. However, it is the original songs in the film, written by John Carney and Gary Clark, that really makes the film shine. Like Once, the film cast people who were actual musicians, with the classicly trained soprano Ferdia Walsh-Peelo shining as the lead singer of the band. The songs fit right at home with the music of the time period and like Once the lyrics reference what’s going on in Conor’s life, including his growing feelings for Raphina, played excellently by young actress Lucy Boynton. In fact, I would argue that the epic anthem “Drive It Like You Stole It” could end up becoming as big a hit as “Falling Slowly.”

The more than I think about Sing Street, the more I absolutely love the film. John Carney has made a 1980s-set coming-of-age story that is most definitely his best film since Once and is sure to be loved by people of all ages. Sporting great songs and great young cast, this is a film that is going to leave you singing along.