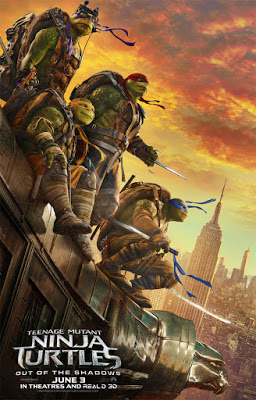 The Teenage Mutant Ninja Turtles must band together to face off against new mutant foes and an extraterrestrial threat in Teenage Mutant Ninja Turtles: Out of the Shadows. Following their defeat of the Shredder (Brian Tee) one year previous, Leonardo (Pete Ploszek), Raphael (Alan Ritchson), Donatello (Jeremy Howard), and Michelangelo (Noel Fisher) let Vernon Fenwick (Will Arnett) take all the credit for saving the city, while the turtles remain hidden in the shadows.

Meanwhile, a correctional officer named Casey Jones (Stephen Amell) is accompanying Shredder on a prison transfer when the latter escapes with the help of a teleportation device operated by Baxter Stockman (Tyler Perry). The teleportation technology belongs to brain-like alien Commander Krang (Brad Garrett), who instructs Shredder to find the other pieces of the device and open a portal to transport Krang’s warship the Technodrome to Earth.

To help with the plan, Krang provides Shredder with a purple ooze, which turns lowlife thugs Bebop (Gary Anthony Williams) and Rocksteady (Stephen “Sheamus” Farrelly) into Shredder’s mutant henchmen. It is up to the turtles, Casey Jones, and April O’Neal (Megan Fox) to put a stop to Krang and Shredder’s plans.

Teenage Mutant Ninja Turtles: Out of the Shadows is the sequel to the 2014 Michael Bay produced reboot. Out of all the Teenage Mutant Ninja Turtle films, including the original live-action trilogy from the 1990s, Out of the Shadows is probably the film most directly inspired by the 1987 animated series, which is likely the version of the turtles most people of my generation grew up with. The elements from the cartoon featured in the film include the turtles’ gadget-laden van, as well as the mutant henchmen Bebop and Rocksteady and the extraterrestrial antagonist Krang. Heck, the credits for the film even features a new version of the animated series’ theme song.

It is probably this nostalgic connection to the cartoon that helps to make Teenage Mutant Ninja Turtles: Out of the Shadows a noticeable improvement over the previous film. While I am still not a fan of the way these modern turtles are characterized, I am able to look past these issues more in this film. Teenage Mutant Ninja Turtles: Out of the Shadows is probably at its best when it’s CGI turtles fighting either a CGI Warthog and Rhinoceros or a CGI brain-shaped alien in a giant robot body. Human villain Shredder was recast for this second film and even though Brian Tee (The Wolverine) does a fine enough job, Shredder is somewhat overshadowed by the mutant and alien characters and doesn’t even wear his signature helmet for much of the film.  I’m also not sure about the stunt casting of WWE Superstar Sheamus as Rocksteady, since the bulk of the role is motion capture and voice work and I don’t Sheamus’ Irish accent really fits the character. The same can be said for Brad Garrett’s voice acting for Krang, which is a lot more deeper than what fans of the villain from the animated series will remember.

While I was somewhat surprised by Megan Fox’s turn as April O’Neal in the previous film, she is back to being little more than eye candy here, with her very first scene in the film having her in a very revealing Catholic school uniform. I was also less than impressed with the performance by Arrow‘s Stephen Amell as Casey Jones, with this version of the character not holding a candle to Elias Koteas’ definitive performance of the character from the 1990 Teenage Mutant Ninja Turtles film. Finally, I don’t really know what to think of Tyler Perry’s very nerdy performance as mad scientist Baxter Stockman, though I am curious if we’ll see the mutated fly version of the character in later films.

With the 2014 reboot, I was ready to write-off this rebooted take on the Teenage Mutant Ninja Turtles. However, while Out of the Shadows doesn’t fully solve the issues I had with the previous film, the multiple references to the 1987 animated series helped to make it a somewhat more enjoyable film.