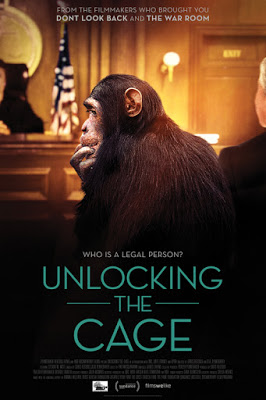 A lawyer fights for the rights of autonomous animals in Unlocking the Cage. Animal rights lawyer Steven Wise has committed his career to ensuring that animals receive the same level of rights as humans, focusing on intelligent animals, such as apes, elephants, and dolphins. Teaming with the Nonhuman Rights Project, Wise and his team file habeas corpus lawsuits in defense of Chimpanzees in captivity, with the ultimate goal to have them located to a sanctuary with more appropriate living conditions.

What defines a person? That is the ultimate question being asked in Unlocking the Cage, which follow lawyer Steven Wise, as he fights for the rights of non-human animals. Wise is arguing that person doesn’t necessarily have to mean human and that animal such as chimps deserve to be treated like the autonomous beings that they are, who don’t have to spend their entire life living in cages.

Unlocking the Cage makes a point of emphasizing the different between animal rights and animal welfare, when it comes to Steven Wise’s fight. The issue has little to with whether these animals’ living conditions are human, but rather if it’s a place that they would be happy living in. While there is a fear of the precedent giving animals legal rights would set, it is indeed a crusade that is worth getting behind.