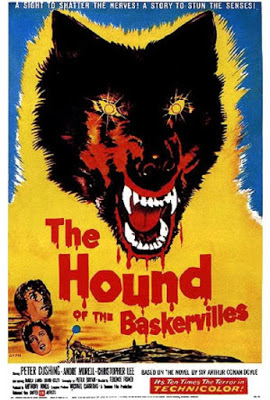 I conclude my yearlong exploration of classic horror with Hammer Films 1959 adaptation of Arthur Conan Doyle’s The Hound of the Baskervilles. Following the death of Sir Charles Baskerville, Dr. Richard Mortimer (Francis de Wolff) seeks the assistance of Sherlock Holmes (Peter Cushing) to protect the remaining Baskerville heir Sir Henry (Christopher Lee) from the apparent curse placed upon the family. Holmes sends Dr.Watson (André Morell) to accompany Sir Henry to Baskerville Hall to find an answer to Sir Charles’ death, which seems to be related to the legend of a hell hound that plagues the family.

By the time Hammer Films produced their version of The Hound of the Baskervilles, there have already been more than a half dozen adaptations of the well-known Sherlock Holmes novel, which includes the definitive 1939 adaptation starring Basil Rathbone. As such, this is far from the first time this story was brought to the screen (and far from the last).

It actually a bit of a stretch to lump The Hound of the Baskervilles into the category of classic horror, since like all Sherlock Holmes adventures, it is much more a mystery. However, you cannot deny the horror elements of the story, particularly when it comes to the legend of the titular hound. In addition, since Sherlock Holmes stories are often notable for being told from Watson’s perspective, Holmes himself is missing for a good chunk of the story, as Watson leaves without him.

The Hound of the Baskervilles features solid performances by Hammer Film regulars Peter Cushing and Christopher Lee, even though very few of the supporting characters are all that enumerable. Cushing makes for a quite fine Sherlock Holmes, who he would play again in a 1960s BBC TV series. However, this is probably far from the best adaptation of The Hound of the Baskervilles and I should definitely try to see the Basil Rathbone version one of these days.