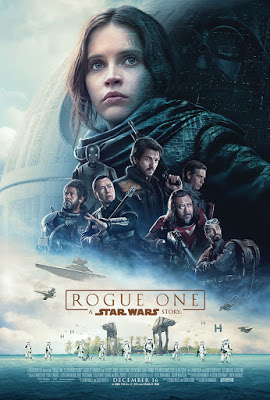 A group of rebels sets out to acquire the plans for the Death Star in Rogue One: A Star Wars Story. Jyn Erso (Felicity Jones) is a rebellious young woman, who is recruited by the Rebel Alliance to intercept a message from her father Galen (Mads Mikkelsen), which was delivered by defected Imperial pilot Bodhi Rook (Riz Ahmed) to the extremist Saw Gerrera (Forest Whitaker), the latter of whom raised Jyn as a child.

Travelling with Intelligence officer Cassian Andor (Diego Luna) and his reprogrammed Imperial droid K-2SO (Alan Tudyk), Jyn discovers that her father secretly built a weakness into the Empire’s new weapon the Death Star, the construction of which is being overseen by Imperial Director of Advanced Weapons Research
Orson Krennic (Ben Mendelsohn). With the Rebel Alliance reluctant to authorize a strike, Jyn and Cassian go rogue and travel with Bodhi, Chirrut Îmwe (Donnie Yen), and Baze Malbus (Wen Jiang) on a mission to acquire the plans for the Death Star.

In the decades since their release, the Star Wars films were supplemented by the Expanded Universe, which told new stories through novels, video games, and other media. While a lot of these stories were designated non-canon after Disney acquired LucasFilm, an effort is now underway to produce new films set in the Star Wars universe that takes place outside of the central Skywalker saga. The first of these films is Rogue One, which details the events that happen directly before the start of the original Star Wars film.

While technically a spin-off, Rogue One fits nicely within the continuity of the series, filling in some of the gaps between Revenge of the Sith and A New Hope. The film even has Genevieve O’Reilly and Jimmy Smits returning from the prequel trilogy as Rebel Alliance leaders Mon Mothma and Bail Organa. The film also has a small, but poignant role for Darth Vader, once again voiced by James Earl Jones. However, probably the most jarring connective tissue with the original film is the inclusion of Death Star commander Grand Moff Tarkin, with new actor Guy Henry being digitally manipulated to appear as the long-dead Peter Cushing. While this technology has improved greatly over the years, it is still hard to avoid the uncanny valley when these effects are used.

If there is one really positive thing to say about Rogue One, it’s that it is a very noticeably different type of Star Wars film. Director Gareth Edwards (Monsters, Godzilla) has long described Rogue One as a war film and indeed the film’s epic climatic battle can pretty much be described as the Star Wars universe’s D-Day. With both X-Wings in the air and troops on the ground, the final battle is pretty much non-stop action and it quickly becomes apparent that no character is safe in this Star Wars story.

If there are issues I have with Rogue One, it’s that the road to that final battle is a bit of a bumpy one. There are a lot of detours in this film, which often seem like ways to fill out the story. Also, the less said about Saw Gerrera’s large CGI squid monster, the better. However, one thing that Rogue One absolutely got right is the casting, which is probably the most diverse cast for a Star Wars film. Not only is there a female in the lead, but you have Mexican actor Diego Luna, British/Pakistani actor Riz Ahmed, and Chinese actors Donnie Yen and Wen Jiang. However, the biggest scene stealer in the film is Alan Tudyk as K-2SO, who provides the bulk of the film’s comic relief.

Despite a few issues, Rogue One was overall a satisfying Star Wars spin-off, which fills in the gap between films in the main saga.