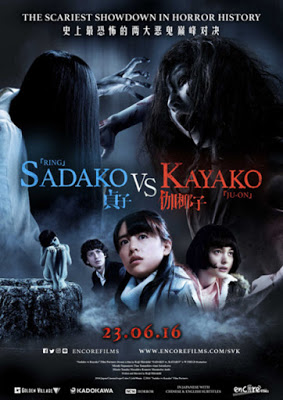 The two icons of J-Horror clash in Sadako vs. Kayako. Yuri (Mizuki Yamamoto) and Natsumi (Aimi Satsukawa) are two university students, who purchase an old secondhand VCR to transfer some old home movies to DVD. However, inside they find a strange tape, which they soon realize is the cursed video tape mentioned to them by their urban legends professor Morishige (Masahiro Komoto). Meanwhile, Suzuka (Tina Tamashiro) moves into a new house with her parents and finds herself drawn to the creepy house next door. Cursed by the spirits of Sadako and Kayako respectively, Yuri and Suzuka enlist the help of spiritual medium Keizo (Masanobu Andô) and his blind child assistant Tamao (Maiko Kikuchi) to pit these two evil spirits against each other and break the curse.

Hideo Nakata’s Ringu and Takashi Shimizu’s Ju-on were probably the biggest crossover successes of the J-Horror craze fifteen or so years ago, with both films receiving North American remakes as The Ring and The Grudge. Filmmaker Kôji Shiraishi brings the antagonists of both films together in a crossover, following in the steps of Godzilla vs King Kong, Alien vs Predator, and Freddy vs Jason. Sadako vs Kayako has a somewhat campy tongue-in-cheek tone that has a little fun with the familiar tropes of both franchises, which includes changing a few of the rules to fit the plot.

If a litmus test of a horror film is whether or not you find it scary, I would say that Sadako vs Kayako somewhat fails in that regard, with the exception of Kayako, whose gurgling and crawling never fails to give chills. That all said, it is quite obvious that Sadako vs Kayako does not really take itself all that serious and it is meant to be watched just for the fun of it.

The titular battle is somewhat on the anti-climatic side, even though there are some fun crowd-pleasing moments. It takes way too long for the two titular ghosts to finally get together and the fight is over before you know it. However, the film does feature an interesting twist towards the end, which would make for an interesting sequel if they ever decide to make another one of these Sadako/Kayako crossovers.

While it doesn’t hold a candle to either of the original J-Horror classics, Sadako vs. Kayako is still a somewhat enjoyable campy ghostly crossover. At the very least, this film is somewhat more watchable than the most recent sequels from both of the series, which have definitely been on a downward spiral in recent years.