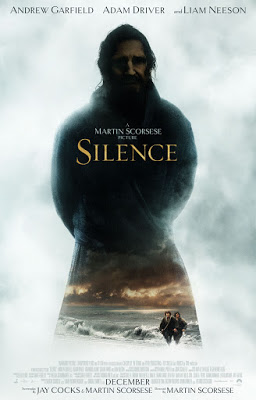 Two 17th century Jesuit priests find their faith tested as they search for their mentor in Japan in Silence. Jesuit priest Alessandro Valignano (Ciarán Hinds) receives word that the long lost missionary Cristóvão Ferreira (Liam Neeson) has apostatized his faith after being tortured by the anti-Christian Japanese inquisitor Inoue Masashige (Issey Ogata). Ferreira’s pupils Father Sebastião Rodrigues (Andrew Garfield) and Father Francisco Garupe (Adam Driver) do not believe this news and they ask Valignano to send them to Japan, in order to search for their mentor. Guided by alcoholic fisherman Kichijiro (Yosuke Kubozuka), Rodrigues and Garupe arrive in Japan, where Christians have to practice their faith in silence, in order to avoid persecution and torture by the inquisitor.

Long considered a passion project for the filmmaker, Martin Scorsese directs this adaptation of the 1966 novel Shūsaku Endō, which in turn is loosely inspired by the true persecution of Christians that happened in 17th century Japan. There was a very brief period when Christianity seemingly flourished in the country, however the predominantly Buddhist leadership of Japan rejected this foreign religion and tortured and killed anyone who was caught practicing as a Christian.

At the core of the story of Silence is the crisis of faith experienced by Sebastião Rodrigues, as he embarks on the search for his mentor. While fellow priest Francisco Garupe is unquestionably devout, Ferreira begins to have doubts about his faith, especially as he witnesses the atrocities performed against Christians by the Japanese. As his prayers are met with silence, Rodrigues begins to even wonder if there is even a God at all. Silence is quite a bleak film, especially when it comes to various torture methods utilized by the Japanese to punish Christians, such seaside crucifixions or being hung upside down over a pit. The ultimate goal of the Japanese is to breakdown the spirit of Christians and force them to denounce their faith.

You don’t really have to be a religious person to understand the message that Silence is trying to convey. The persecutions of Christians in Japan began after the Jesuits tried to introduce the religion to the country, going against the dominant Buddhist faith. Ultimately Silence is asking whether it was a right thing to force a religion onto a foreign culture, which may not even fully understand the teachings. While Silence is a story taking place in the 17th century, the themes of the film can be related to today’s world, since there are still those being persecuted for their religious beliefs.

While there’s no offence intended towards Andrew Garfield and Adam Driver, I think that Silence might have overall been a better film if originally cast leads Gael García Bernal and Benicio Del Toro stayed on board the project. Garfield and Driver are fine enough in their performances, even if they do seem somewhat out of place in this story. However, the film does feature a scene-stealing turn from Japanese actor Issey Ogata as the very charismatic inquisitor Inoue Masashige. Then there’s Liam Neeson as Cristóvão Ferreira, whose fallen priest character drives the story, even though Neeson only has a small amount of actual screen time.

Altogether Silence is a quite bleak film that examines what exactly to means to have faith, especially in a foreign culture that rejects it.