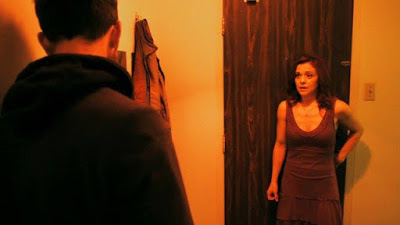 A man goes on the run to escape the consequences of an unexpected death in Broken Mile. Shaun (Francesco Filice) wakes up one evening to find the girl he was with dead of an apparent suicide. Shaun proceeds to panic, especially as he sees his best friend, and the girl’s boyfriend, Kenny (Patrick McFadden) arriving towards the apartment. Fearing the gun-toting Kenny’s wrath, Shaun seeks out the help of his ex girlfriend Amy (Caleigh Le Grand) and the two go on the run across the city, with Kenny on their tail.

Broken Mile is the latest feature film from director Justin McConnell (The Collapsed), which is a thriller that is presented as a single continuous take. The film begins with the protagonist Shaun passed out in a bathtub and continues in real time for the next 80 minutes, as Shuan plays a dangerous cat and mouse game with his presumably vengeful friend Kenny. Shaun is soon joined by his ex Amy and together they try to find a way to peacefully resolve this situation.

For the most part, Broken Mile is quite successful in providing the appearance that it was done in a single take, with the few cuts in the film being well hidden. However, the real time format of the film does result in some scenes feeling a bit tedious, such as a lengthy sequence that is entirely just Amy driving towards Shaun, while listening to the news on the radio. Also, the film’s handheld camera work and many quick turns can cause viewers to feel motion sickness. However, despite those flaws, I have to say that Broken Mile is a simple, yet effective single take thriller that should be praised for the difficult technical feat of presenting the story in a single take.