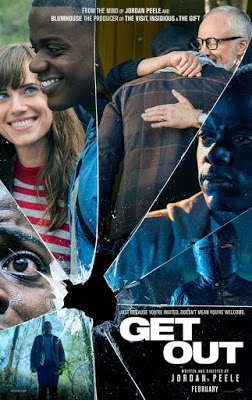 A young African American man discovers that something is horribly off about the family of his girlfriend in Get Out.
Chris Washington (Daniel Kaluuya) leaves with her girlfriend Rose Armitage (Allison Williams) to meet her parents Missy (Catherine Keener) and Dean (Bradley Whitford). Initially concerned about Rose’s parents not knowing he is black, they appear to be a welcoming and friendly couple. However, Chris notices something off about the family’s black servants, which causes him to suspect that something sinister might be going on with this family.

Comedian Jordan Peele (Key and Peele) makes his directorial debut with this racially charged horror film. Chris is a young black man, who has been dating his white girlfriend Rose for a few months. When it comes for him to meet the parents, Chris is concerned his race might become an issue. However, Chris finds out that Rose’s parents Missy and Dean are quite welcoming individuals, though Chris notices something strange about the family’s black landscaper Walter (Marcus Henderson) and housekeeper Georgina (Betty Gabriel), who act in a very unnatural manner. Things get stranger when Chris runs into Missy in the middle of the night and she hypnotizes his, presumably to cure his addiction to smoking. As the weekend progresses, Chris realizes that this family has much more sinister plans.

I have to admit that when I first heard of Get Out, I wasn’t so sure about a horror film with a very racially charged story. However, after the film received near-unanimous praise, I was convinced to check the film out and I was pleasantly surprised that Get Out was a very smart and well-executed horror story. Using the influence of films such as The Wicker Man and The Stepford Wives, Jordan Peele creates a film that works just as well as a racial allegory as it is a thriller.

It isn’t really a twist that there is something sinister about Rose’s family, though there are a few interesting twist and turns in the film, particularly in the third act. While Get Out does feature a number of jump scares, including a very unexpected one in the first act, the film is ultimately more about being really creeped out about the unusual behaviour of the folks Chris encounters. Then there is the film’s hypnotism aspect, which does require a level of suspension of disbelief, especially if you are aware how hypnosis works. Get Out also a tension-breaking side plot involving Chris’ comedic friend Rod Williams (LilRel Howery), who becomes concerned about the behaviour of Rose’s family.

It isn’t often these days that a horror film also includes social commentary, so Get Out came as a very pleasant surprise.