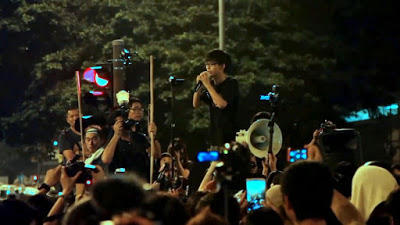 A Hong Kong teenager leads protests against the Chinese government in Joshua: Teenager vs Superpower. Due to its years as a British colony, Hong Kong has always has a much more westernized culture than that of mainland China. When the Chinese national education plan is introduced, seemingly introducing communist practices to Hong Kong, teenager Joshua Wong forms the student group Scholarism to protest these new policies. As China removes more power from Hong Kong, Joshua Wong becomes the voice of the resistance.

It has been nearly two decades since the United Kingdom handed over control of Hong Kong back to China in 1997. At the time, China promised a “one country, two systems” policy and the Hong Kongers would get to vote their own leader. However, as the Chinese government begins to renege on these promise, Joshua Wong and his friends lead protests against China introducing its communist policies to Hong Kong.

One thing that becomes really apparent watching Joshua: Teenage vs. Superpower is how different the culture of Hong Kong is from that of mainland China. Through its many years as British colony, Hong Kong has become a very westernized city and the young generation want to ensure that they have the power to choose their own future. Joshua: Teenage vs. Superpower is a gripping story of a normal teen turned activist, who fights against the communist control of his home.