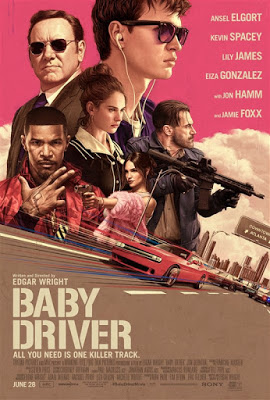 A young and skilled getaway driver wants out from a life of crime in Baby Driver. Baby (Ansel Elgort) is a young man, who has been working as a getaway driver in order to pay off a debt to crime boss Doc (Kevin Spacey). Baby hopes to be done with Doc after his debt is paid off, a desire that is amplified when he begins to fall for waitress Debora (Lily James). However, Doc calls Baby back for a high-paying job with a crew of Buddy (Jon Hamm), Darling (Eiza González), and Bats (Jamie Foxx). Things quickly go south and Baby has to use his skills to make it out safely.

Director Edgar Wright (Shaun of the Dead, Hot Fuzz) kicks it up a notched with the action heist comedy Baby Driver. At the center of this story is Baby, who suffers from a hearing problem and spends most of his time listening to music on his collection of iPods. It is because of this that Baby is an exceptionally good driver, with his actions often being synced to the song that he is currently listening to.

Baby desperately wants out of the life of crime that he finds himself stuck in the middle of, however just when it seems like he has repaid his debt, Doc comes calling for another job, giving some passive aggressive threats to Baby’s new love Debora. However, with a crew that includes the short-fused Bats and intense Buddy, Baby will be lucky if he can make it out of this job alive.

Best known as the director of the “Cornetto Trilogy” of Shaun of the Dead, Hot Fuzz, and The World’s End, as well as 2010’s Scott Pilgrim vs. The World, Edgar Wright’s career hit a speed bump a few years ago when he left the director’s chair of his long-in-development Ant-Man film over creative difference with Marvel (with me surmising that the eventual film suffered a little bit as a result). However, Wright bounces back in a big way with Baby Driver, which is undoubtedly the most original blockbuster that will be playing this summer.

Relative newcomer Ansel Elgort (The Fault in Our Stars) joins an all-star cast in a film that combines multiple different genres. Baby Driver‘s main feature is the film’s heavily choreographed action scenes, synchronized with the film’s very diverse soundtrack. In other words, the film is essentially a feature length version of the “Don’t Stop Me Now” sequence of Shaun of the Dead. As the titular Baby, Elgort really seems to be channeling James Dean as a good boy, who has found himself on the wrong side of the law. A man of very few words, Baby lets the songs from his iPod speak for him, as he proves himself to be one of the best drivers around.

Baby Driver was quite honestly one of the most fun times I had at a cinema this year and this film is an absolutely must-see, if only for the fact that it is a great alternative to the countless franchises that dominate the multiplexes.