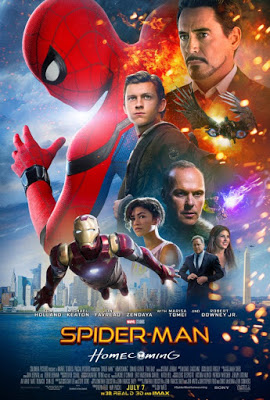 The webcrawler officially enters the Marvel cinematic universe in Spider-Man: Homecoming. After assisting Tony Stark (Robert Downey Jr.) during Captain America: Civil War, Peter Parker (Tom Holland) is desperate to become a full-time Avenger. However, Stark would prefer than Peter focus on his high school studies. However, when he finds out that a criminal named Adrian Toomes (Michael Keaton) has been using scavenged alien technology to create powerful weapons, Peter decides that it is time for Spider-Man to prove himself.

Knowing that it wouldn’t be a good idea to show Spider-Man’s origins for a third time, Spider-Man: Homecoming instead kicks off shortly after the events of Captain America: Civil War. Fighting alongside Iron Man was such a rush for Peter Parker and he can’t wait until the next mission, with Peter frequently bombarding Tony Stark’s head of security Happy Hogan (Jon Favreau) with updates of his work as a “friendly neighbourhood Spider-Man.” At the same time, Peter struggles to balance his superhero life with his normal life as a high school student, which gets complicated after his best friend Ned (Jacob Batalon) finds out Peter’s secret identity.

Meanwhile, Adrian Toomes has turned to a life of crime after Tony Stark’s Department of Damage Control put Toomes’ salvage company out of business following the Battle of New York. As The Vulture, Toomes and his team steal salvaged technology from the D.O.D.C. and reforge them into weapons to sell to the highest bidder. Despite the advice by Tony Stark to focus more on his studies, Peter decides to take on Toomes and prove that Spider-Man is worthy of being an Avenger.

If there is a major difference in Spider-Man: Homecoming to the other big screen portrayals of Spider-Man, it is that this film shows the character at his youngest. This version of Peter Parker is only 15 years old, played by 21 year old Tom Holland, and much of the plot focuses on Peter’s life as a high school student, which includes his constant bullying by Flash Thompson (Tony Revolori), the nihilistic comments by Michelle Jones (Zendaya) and his unrequited crush for popular girl Liz (Laura Harrier).

I wouldn’t go as far to say that Spider-Man: Homecoming is the best Spider-Man film, a title I still believe belongs to Spider-Man 2, however it is probably one of the most fun and enjoyable. More than any of the previous films, Spider-Man: Homecoming really captures Spider-Man’s snarky sarcasm, including his habit of leaving notes on captured criminals. While the film does have Spider-Man wearing a high tech suit designed by Tony Stark, the look of the character is probably the closest to the comics. Then there is the little touches, such as Peter covertly making a batch of web fluid in his chemistry class. I also don’t really mind that they decided to cast Marisa Tomei as Aunt May, despite her being much younger than the character is in the comics.

Nearly three decades after playing Batman, Michael Keaton returns to superhero films playing the main villain Adrian Toomes/The Vulture. While it is indeed ironic that Keaton is playing a bird-themed villain just a few years after starring in Birdman, the actor does shine in the role. There is one season in particular, where Keaton makes full use of his facial gestures to show what is going on in Toomes’ mind. It can be argued that Toomes is less a full villain and more someone who turned to a life of crime after the cards were turned against him.

It is interesting to note that the chronology of Spider-Man: Homecoming is set eight years after The Avengers, which would actually make the film set three years into the future. Theoretically, the reason for this could be better fit the teenage Spider-Man within the upcoming films of the Marvel Cinematic Universe, including an appearance in Avengers: Infinity War next year.

Altogether, Spider-Man: Homecoming is a quite fun and enjoyable big screen depiction of the wallcrawler.