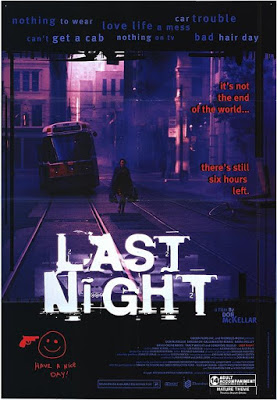 As an appropriate end to my yearlong venture through classic Canadian cinema, this month I watched Don McKellar’s 1998 apocalyptic dark comedy Last Night. In six hours time, the world will come to an end at the stroke of midnight. Patrick (Don McKellar) is content with facing the end alone in his apartment. However, he comes across Sandra (Sandra Oh), who is desperate to return to her husband Duncan (David Cronenberg), so they can fulfill the suicide pact they had with each other. Patrick decides to help out Sandra, with only a few hours remaining until the end.

Best known in the Canadian film landscape as an actor, Last Night marked Don McKellar’s feature film debut as a filmmaker. The film focuses a number of individuals in Toronto, during the final six hours of life on Earth. After partaking in a final dinner with his family, widower Patrick would just prefer to spend the end of the world alone, however he ends up trying to help Sandra instead. Elsewhere, Patrick’s friend Craig (Callum Keith Rennie) is trying to cross off all his remaining sexual fantasies, his sister Jenny (Sarah Polley) goes to an end of the world celebration and Sandra’s husband Duncan dutifully calls all of his gas company clients thanking them for their service.

An interesting thing that Don McKellar does with Last Night is that he keeps it ambiguous what exactly the upcoming apocalyptic event is. The only real hint is the fact that, despite the film being named Last Night, all the exterior scenes are in complete daylight, which suggests the possibility that the sun is going supernova. Instead of focusing on the apocalypse itself, Last Night is more about how a handful of people decide to spend their final hours on Earth. Some like Patrick are somewhat apathetic, while others decide to go crazy in the streets. Most of the characters seen in the film end up being connected in some way, even if they don’t directly interact with Patrick or Sandra.

Last Night is also notable for the fact that it features filmmaker David Cronenberg in a rare acting role, with his character of Duncan being most remembered for calmly calling every client of the gas company that he runs, promising them that every effort will be made to keep the gas running until the very end. In fact, Last Night features appearances from many well known faces from the Canadian film industry at the time, including Tracy Wright, Geneviève Bujold, Jackie Burroughs, and a very brief cameo by Bruce McDonald.

Last Night was nominated for 12 Genie Award nominations and it ended up winning Best Actress of Sandra Oh and Best Supporting Actor for Callum Keith Rennie. In recent times, Last Night came up as a source of comparison to 2012’s Seeking a Friend for the End of the World, starring Steve Carell and Keira Knightley, which happens to have a plot that is quite similar to Last Night. However, that is likely a coincidence and it could be argued that Last Night has the better ending, which will likely leave you humming the Cuban song “Guantanamera.”