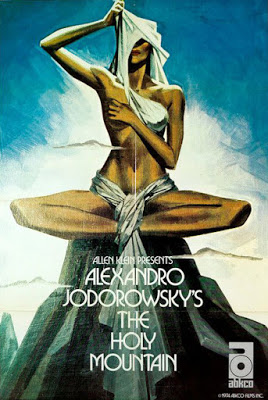 I’m kicking off my 2018 edition of the Blindspot Series with Alejandro Jodorowsky’s 1973 surrealist fantasy The Holy Mountain. A Christ-like thief (Horacio Salinas) finds his way to the home of The Alchemist (Alejandro Jodorowsky), a mysterious figure living in a tower. Along with seven other individuals, each representing a planet of the solar system, The Alchemist and The Thief make the journey towards The Holy Mountain.

Chilean director Alejandro Jodorowsky first came into prominence with his 1970 Western El Topo, which was one of the earliest film to play on the Midnight Movie circuit. The Holy Mountain was Jodorowsky’s sophomore picture, which seems to be heavily influenced by the surrealist films of Luis Buñuel and Salvador Dalí. Within the first ten minutes of The Holy Mountain, we see two women being stripped naked and shaved bald, a congregation of crucified animal corpses, and a woman being casually raped in the middle of the street, while another laughs and takes photos. This only scratches the surface of the content of The Holy Mountain, which seems more like a series of interconnected vignettes than a single narrative.

The first half hour of The Holy Mountain is nearly entirely dialogue-free as it follows the adventures of The Thief and a footless and hand-less dwarf. There is some very obvious religious allegory in this section of the film, as The Thief bears a striking resemblance to Jesus Christ, to the point where locals cast an impression of him and sell his likeness as crucifixes. It is interesting to note that apparently George Harrison was attached to play The Thief, but dropped out when he objected to scenes of graphic nudity that Jodorowsky refused to remove. The second act of The Holy Mountain introduces the other character one by one through individual vignettes and it isn’t really until the last 45 minutes of the film when the journey to the titular Holy Mountain begins in earnest.

As we are currently in the middle of movements such as #MeToo and #TimesUp, it wouldn’t be right for me to talk about Alejandro Jodorowsky without addressing the elephant in the room, that being his treatment of women, including the fact he has been quoted with saying that he truly raped an actress while making El Topo. Having not seen El Topo, I cannot judge the content of that film, however I will say that there is content in The Holy Mountain that can be viewed as either misogynistic or objectifying of women. There is gratuitous nudity throughout the film, both male and female, but we often treated to close-ups to female breasts and genitals, including a scene that has a group of women, including a young girl, wearing see-through shirts. As I stated earlier, there is a rape within the first few minutes of The Holy Mountain and the woman being raped seems to be laughing an enjoying herself. There is always a fine line between viewing films as art and whether your should also judge it based on the filmmaker as a person. I knew the stories about Alejandro Jodorowsky before watching The Holy Mountain, yet I still opted to put on the blu-ray of the film. Am I in the wrong for doing that? Probably, though I should note that I took no pleasure at the treatment of women in this film.

And with that, we have probably the most political post I have written for the Blindspot Series. I will conclude by saying that while I didn’t love The Holy Mountain, I didn’t exactly hate the film either. While many are completely justified for choosing to boycott the films of Alejandro Jodorowsky, I do not regret giving this film a watch.