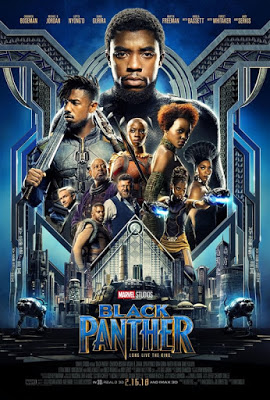 The new king of Wakanda has to protect his homeland from an outsider in Black Panther. Following the events of Captain America: Civil War, T’Challa (Chadwick Boseman) returns homes to be crowned the new king of Wakanda, a technologically advanced country in Africa, hidden from the rest of the world. Not long after the coronation ceremony, T’Challa receives reports that the South African arms dealer Ulysses Klaue (Andy Serkis) has surfaced and has stolen a Wakandan artifact and plans to sell it off.

As the Black Panther, T’Challa travels to South Korea to capture Klaue and ends up crossing paths with CIA agent Everett K. Ross (Martin Freeman), who also plans on apprehending Klaue. T’Challa soon comes to realize that Klaue is working with black-ops officer Erik “Killmonger” Stevens (Michael B. Jordan), who turns out to be T’Challa’s estranged cousin N’Jadaka, who was stranded in the US as a child. With Killmonger desiring to usurp and reveal Wakanda to the world, T’Challa has to do everything he can to protect his people.

After having  featured role in Captain America: Civil War, the African superhero T’Challa comes front and centre in Black Panther. Many centuries ago, the country of Wakanda was formed after a meteorite containing the valuable mineral of vibranium struck down into Africa. Even though vibranium allows for the construction of highly advanced technologies, the Wakandan people decided to put forth the appearance of a third world nation to the outside world. As the new king, T’Challa has the support of his mother Ramonda (Angela Bassett), tech-savy sister Shuri (Letitia Wright), ex-lover and War Dog Nakia (Lupita Nyong’o), border guards Okoye (Danai Gurira) and W’Kabi (Daniel Kaluuya), and shaman Zuri (Forest Whitaker).

In advance of the release of Black Panther, directed by Ryan Coogler (Fruitvale Station, Creed), there has been some hyperbole calling the film the first black superhero film. While this isn’t exactly true, with Black Panther being predated by films such as Blade and Spawn, this is indeed the first high profile superhero film that I can think of that has nearly an entirely all-black cast, with Martin Freeman and Andy Serkis being the only white actors to have major roles in Black Panther. This alone is a major accomplishment and a huge step forward when it comes to diversity in films.

Black Panther sets things off on a major high note with a first act that seems right out of a James Bond film, complete with Shuri showing off her new gadgets to T’Challa and a scene that takes place within a casino. While the plot eventually settles into a typical origin story narrative, Black Panther is elevated through the use of sociopolitical themes involving both race and the world as a community.

One of the biggest issues at the core of Black Panther is the decision of the people of Wakanda to hide their technological advances from the world. This is a major driving force of Killmonger, who want to use Wakanda’s weapons and technology to strike revenge against those who oppressed blacks all over the world. Despite the radical actions of Killmonger, his motivations are a relatable one, especially since Wakanda has chosen over the years not to help out nations in need and Killmonger himself is the result of being stranded alone in the US.

At the end of the day, Black Panther is a film that can be enjoyed by people of all races, however the African-American community finally have a superhero of their own to look up to!